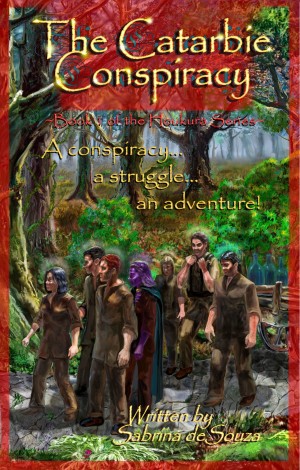 By Sabrina deSouza
Sci-Fi Fantasy Series set on earth and on the world of Houkura. Fast-paced action, adventure, humour, magic. Book 1 of the 6-part Houkura Series. More
Science, fantasy, mystery, faith & humour combine for an action-packed read in The Catarbie Conspiracy
In this first novel in the Houkura Series, author Sabrina deSouza takes readers on a fascinating trip to an alien planet where magic, conspiracy and a mysterious illness intertwine to create a moral dilemma for the book's main characters.

As the book opens, 17-year-old Tarheen, the protagonist in this sci-fi adventure, is at home with his mother. But his desire to explore the extent of his magic abilities leads him to an encounter with a travelling magi -- and to serious consequences that are more than a teenager can handle.

Meanwhile, three strangers who meet in a small Australian town are suddenly transported to another world called Houkura where they, too, have magical gifts. When a mysterious illness, called Catarbie, strikes one of the trio's new friends, they find themselves torn between trying to find their way back to Earth or staying on Houkura to help find a cure.
Available ebook formats: epub
Price: $3.99 USD
Buy Add to Library Give as a Gift
How gifting works
Create Widget
Tags: teenager alien world magical creatures magic adventure story illustrated action adventure humor action adventure houkura sabrina desouza
About Sabrina deSouza

Sabrina deSouza was born in Dandenong, Victoria, Australia, grew up in Darwin, Northern Territory, and moved to Canberra, in the Australian Capital Territory before relocating to Queensland. She holds a Bachelor of Science degree, as well as an Honours Degree in Science. deSouza spent nine years as an Australian Customs Officer, the last seven of which were spent as an intelligence analyst. After deciding to leave government and join private industry, she went to work as a consultant and the principal trainer with Visual Analysis in Canberra before leaving to start her own consultancy business, Q3i2 in Queensland.

Sci-Fi Fantasy series set on Earth and the world of Houkura.

You have subscribed to alerts for Sabrina deSouza.

You have been added to Sabrina deSouza's favorite list.

You can also sign-up to receive email notifications whenever Sabrina deSouza releases a new book.