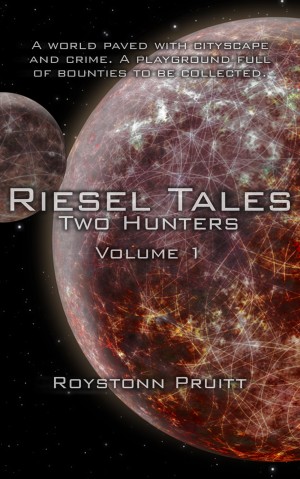 By Roystonn Pruitt
Two bounty hunters make their living doing what they do best on the urban dystopia world of Riesel. Surviving is hard enough, and their clashing personalities don't make things any easier. Runge is a carefree thug who wants all the pleasures of the galaxy, and Ramy is a straight-minded gunslinger who just wants to earn her living with as little trouble as possible. More
An unending expanse of miles-high towers. Thievery and murder in every shadow. Air made pale by centuries of pollution. The dejected urban planet of Riesel has indeed seen better days.

Overrun with crime and ruled by a powerful mafia faction, the world is a cutthroat's paradise. It's also a fantastic place to be if you're looking to collect on a bounty. It's a cornucopia of opportunity for the male and female bounty-hunting twosome Runge Margavo and Ramy Dusotes, but merely existing on such a hostile world is a challenge in itself.

This is not made any easier by the fact that they have to survive each other in the process. Their clashing personalities are just about as dangerous as the missions they carry out, which makes one wonder: Why haven't they killed each other yet?

From retrieving valuable stolen goods and personnel, to stealthy assassination jobs, to braving the heights of a rusting artificial continent in the hazy sky, these two hunters go where the money is and take it for all that it's worth.

The paychecks are big, and so are the risks.

Volume 1 is a collection of the first four stories of the Riesel Tales series:

I came into this world in 1987 with a love science fiction, and it has been the driving force behind my absurd literary scribbles.

It's not just about the sci-fi. I write about the general happenings of life within a sci-fi setting. In a reflection of my own life, my characters often have to experience hardship before getting what they want. Grit and cynicism are common themes in my stories, but that just makes the light at the end of the tunnel even brighter -- and it's not the headlight of an incoming freight train, either. The darkness is pierced by the brightness of comedy, whether it's the main characters taking wry jabs at each other or some sort of idiosyncratic circumstance putting an amusing twist on a situation. This is all mixed in with a richly detailed depiction of a future world that has seen one too many downturns.

With that in mind, I refer primarily to my Riesel Tales: Two Hunters works. Set over 6000 years in the future on a city-covered dystopia world called Riesel, two bounty hunters by the names of Runge Margavo and Ramy Dusotes make their living doing what they do best. Surviving on such a world is hard enough, and their clashing personalities don't make things any easier. Runge is a wisecracking vice addict who frequents clubs and bars when he's not on a mission, and his platonic partner in business, Ramy Dusotes, serves as his mostly straight-minded female foil.

I can also be found elsewhere on the Web under the handle RieselUniverse, such as Twitter, Facebook, Wikia, TV Tropes (Riesel Tales page), and DeviantArt!

You have subscribed to alerts for Roystonn Pruitt.

You have been added to Roystonn Pruitt's favorite list.

You can also sign-up to receive email notifications whenever Roystonn Pruitt releases a new book.