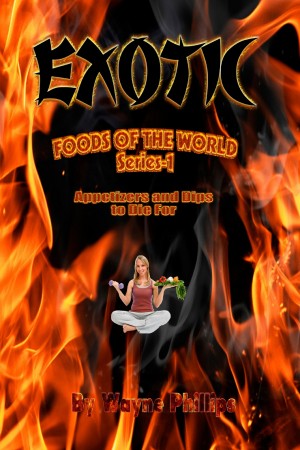 Exotic Foods of the World - Appetizers and Dips to Die For

By Wayne Phillips
These fantastic tasting recipes have been tested on so many people that we feel no additional testing is needed, EXCEPT YOU! The recipes are in their final form. They are the kind of recipes that even I make over and over again. I also have certain favorites like the CRAB DIP from Hawaii, and LUMPIA from the Philippines. They are LIP SMAKIN,TONGUE TASTIN, FINGER LICKIN Good. More
These recipes began in the kitchens of Mom's and Pop's from different worldly locations, then improved in taste by me. Each and every recipe that I improved on has been developed and tested on hundreds of people from different places and different walks of life. They are like SECRET RECIPES found no other place but in this book. They are LIP SMAKIN,TONGUE TASTIN, FINGER LICKIN Good. These recipes stretch from the shores of Hawaii and Japan, in the Pacific, to Islands in the Caribbean. Also, included are American and Mexican favorites. Since we have spent over 30 years on these and other recipes, changing ingredients, amounts, and other things, we feel the finished product on this book represent the best recipes that can be found.
Available ebook formats: epub
Price: $1.99 USD
Buy Add to Library Give as a Gift
How gifting works
Create Widget
Tags: hawaiian food mexican food recipes caribbean food empanadas asian appetizer recipes appetizers and snacks appetizers cooking food hors doeuvres cookbook entertaining menus beveragesspirits canaps appetizer recipes dips and spreads tempura jamiacan beef patties
About Wayne Phillips

Retired from the U.S. Navy, Submarine Service after 22 years. Traveled to many different countries and states during my career. After retiring from the Navy worked in the IT industry for several large communications firms then started my own consulting and training business. During my travels and after retirement my passion was cooking. I have learned so many different recipes and changed them to improve flavor and texture, then thought how great it would be to provide them to the world. So, I decided to start writing cookbooks. The first is titled: EXOTIC Foods of the World, Appetizers and Dips to Die For, Series 1. I plan to write several cookbooks followed by business books on subject matter that I was involved in when I had my own business.

I was born in Chicago, IL, but grew up in Miami, FL. My parents were involved in carnival business, so I traveled to many states while growing up. I went into the Navy when I turned 18 years of age.

You have subscribed to alerts for Wayne Phillips.

You have been added to Wayne Phillips's favorite list.

You can also sign-up to receive email notifications whenever Wayne Phillips releases a new book.