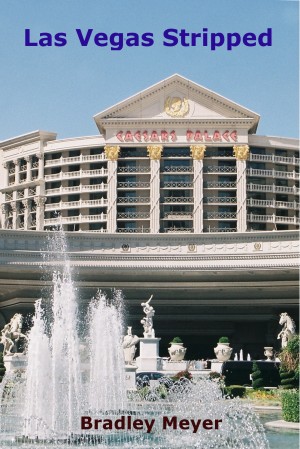 Reviewers have lauded LVS for its Snappy Dialogue, Great Character Mix and James Bondish Hero. It is an action-packed thriller written in the taut, hard-driving style of the Noir masters Hammett and Chandler. Jake, an ex-cowboy stuntman who arrives In Vegas and gets his emotions tied in knots as he gets tangled up in a web of dangerous women.The pace quickens as it races to a chilling conclusion. More
Las Vegas Stripped is a thriller written in the hard-boiled style of the early Noir masters Hammett and Chandler, whose novels were turned into such classic films as The Maltese Falcon and The Brass Key. The story features Jake, an ex-cowboy stuntman who becomes entangled in the intrigues of three gorgeous but devious women. Roped in by her older sister into searching for a missing heiress about to inherit millions, his efforts take him on a tour of the town, from mega-resorts on the Strip to seedier Downtown locales and various strip clubs.

His first-person observations are enlivened with a frequently caustic wit and a deep knowledge of the strange history of Vegas. Along the way, his efforts to find Banff are complicated by the actions of a revenge-minded rodeo cowboy, a hotel security guard and a jealous boyfriend. His success in finding the young woman, far from resolving matters, will lead to events revealing that almost nothing is as it seemed. That's when things get complicated.

Meanwhile, he discovers something disturbing about the actress in from L.A. whom he thought was just a random pick-up. Now he's involved with three beguiling women, each of whom is finding ways to trouble him. Unlike in classic Noir novels, though, our hero breaks from the tradition of stoicism to reveal his torments and pain. It may not be pretty, but it's pretty darn entertaining. So too are the humorous dialogues that are peppered throughout the book.

Jake had come to town because he had latched onto what he had hoped was a sign that he was about to get lucky in love. But now the circumstances between him and Allie, Banff and Cassie are far more inscrutable than any simple A, B, C. And then he gets jumped by one of the guys who has had an eye out for him. This is the first vivid fight in the book that he can't just walk away from.

I began writing fiction in the ‘80s after moving from L.A. to N.Y.C. and by the end of decade I had a literary agent for TOXIC CABAL, a satiric novel I’d written about Manhattan and the Hamptons. Every six months, for five years, I would take a new draft of the novel to that agent - and his reply was always the same --I don’t know, it’s just not quite right. Then he retired, without ever having submitted the book anywhere.

I have now written four unpublished novels and four mainstream but as-yet-unsold screenplays.

My Noir thriller LAS VEGAS STRIPPED, offered here, had a somewhat similar trajectory to TOXIC CABAL. First written in the early 1990s, I rewrote it a number of times over the years. After deciding this Noir novel would be my first eBook, I removed the 21st century descriptions and places in order to set the story in the year 2000.

I have also succeeded at stand-up comedy in New York and, as soon as I cast a comedic Muck, I expect to a series of Muck and Meyer comedies.

You have subscribed to Smashwords Alerts new release notifications for BradleyJayMeyer.

You can also sign-up to receive email notifications whenever BradleyJayMeyer releases a new book.