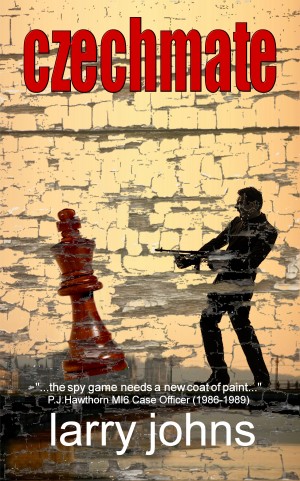 By Larry Johns
A dangerous double agent must be rescued from a Czechoslovakian prison. Or, failing that, he must be disposed of. In the event neither option is available, because the Black King has already "castled".

Born and raised in Cornwall, Larry Johns has earned a living as a soldier, an artist, a jazz musician, a music lecturer and a writer, circumnavigating the world in these professions many times. He learned the mechanics of his original trade with the Staff Band of the Royal Engineers and at Kneller Hall School of Music. During this period he received the first of many rejection slips from the various publishers. It would be some fifteen years before he eventually received an offer to publish. But, during those years, such an offer was the stuff of dreams only. After the military he moved directly to London, where he occupied the lead alto saxophone chair with several big bands, whilst jazzing at many nightspots; most notably ; The &quot;100 Club&quot;, Oxford Street; the &quot;Allnighter&quot;, Soho and &quot;The Bull&#39;s Head&quot; at Barnes. At these and other venues he blew jazz shoulder-to-shoulder with Vic Ash, Harry Klein, Brian Dee, Joe Temperley. One of his enduring memories of those heady be-bob days is of swapping &quot;fours&quot; with the legendary vibraphonist Vic Feldman immediately prior to his moving to the U.S. to join the Woody Herman Orchestra. During this period he also played repiano clarinet with an embryonic London Symphonietta and several smaller classical combinations. Latterly, he was one of Charlie Katz&#39;s &quot;session men&quot;, performing on numerous &quot;hit&quot; (and &quot;not-so-hit&quot;) recordings of the day. Later, he worked directly for several recording companies: Decca, H.M.V., Major-Minor, Philips etc. holding the &quot;Artists and Repertoire&quot; position with most. With Mercury records, he fronted various stage bands on promotional tours across Europe and the Far East, working alongside rising stars of the recording world, Phil Coulter and Mike Leander. On the demise of viable big band work worldwide, Larry - along with many of his contemporaries - joined &quot;Geraldo&#39;s Navy&quot;, and would cross the Atlantic many times - on both &quot;Queens&quot; - haunting the New York jazz scene...For many years to come, during &quot;dry&quot; periods, he would utilise this &quot;jewel&quot; of an employment facility, both for the pocket and for the heart.
The music trade being what it is (was!) the daylight hours were more or less free...and there are only so many hours you can sit by the pool working of your tan!
So Larry was able to spend more time writing and painting.
His seascapes are sold around the world. When not writing, painting, performing or travelling, he teaches art and woodwind privately in Cornwall. For more details visit his website at: www.kornwall.co.uk

You have subscribed to alerts for Larry Johns.

You have been added to Larry Johns's favorite list.

You can also sign-up to receive email notifications whenever Larry Johns releases a new book.