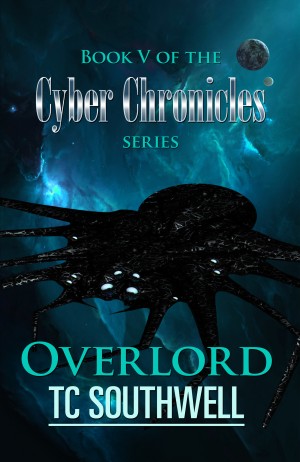 By T C Southwell
Rated 5.00/5 based on 8 reviews
Myon Two enforcer ships are on the brink of capturing Sabre, Tassin and the two friends who are helping them return to Omega Five in an old freighter, and all seems lost. Sabre sends a universal distress message in a last ditch bid to save Tassin from Cybercorp, but the gigantic ship that appears in answer to his call is an Overlord, and worse still, it is the Spider Lord… More
Tassin, Sabre and Kole head for Omega Five with Tarl, an ex-cyber technician turned smuggler they met on the wonder world, Charon Six. Sabre fascinates Tarl, who is also on the run from Myon Two, under a sentence of death. He has restored Sabre’s memories, but, after everything he went through on Myon Two, the cyber is no longer the man Tassin fell in love with on Omega Five. She hopes he will rediscover the feelings he had for her then, and she will do anything to make that happen.

When Myon Two enforcer ships find them in a photon corridor, they are unable to escape in Tarl’s old freighter, Blue Sun. Sabre sends a universal distress message, hoping that this will at least protect Tassin and Kole from Cybercorp. Unfortunately, it is answered by an Overlord. The seven Overlords are universal judges and executioners who keep the peace on a planetary scale, and rarely interfere in minor infractions, but interplanetary law dictates that a universal distress message cannot be ignored, and the Overlords must abide by it, too.

Overlords travel instantaneously between solar systems on giant city-ships capable of destroying planets, and the one who answers Sabre’s call is the Spider Lord, one of the most feared of all the Overlords. Upon learning the cause of the altercation, the Spider Lord orders Sabre to sacrifice himself or his companions will die, and the cyber is forced to step out of an airlock to save them…

Also in Series: The Cyber Chronicles

Review
afrocelttracy reviewed on on July 10, 2012

(reviewed 23 days after purchase)
afrocelttracy reviewed on on July 10, 2012

(reviewed 23 days after purchase)
Vanessa Finaughty reviewed on on Oct. 24, 2011

Overlord, Book 5 of The Cyber Chronicles series, will keep your eyes glued to the pages. The book is filled with action, and details the universe’s politics in such a way that even someone like me, who isn’t too fond of politics, found it intriguing.

Tarl, an ex-cyber technician – now a smuggler with a death sentence on his head – has returned Sabre’s memories to him, but he is no longer the man Tassin knew and grew to love on Omega Five. His traumatic experiences on Myon Two have changed him, and not for the better, particularly in Tassin’s view, since he seems colder towards her now.

In Overlord, readers meet the Overlords, universal judges – and executioners – who enforce peace, sometimes by means of destroying entire planets. To gain one’s attention is generally considered a bad thing. Thankfully, they rarely involve themselves with issues that don’t affect entire planets, yet three of the seven take an interest in Sabre. One wants him as a romantic companion, one as a mentor and friend, and another wants him dead, thinking him an abomination.

Anyone who likes a good science fiction story minus the many technical terms most non-scientists are unable to understand will enjoy this book. I strongly suggest that you read the first four books in the series (the first is free) – although Overlord is readable as a standalone novel, the adventures and back story in the first four books are truly entertaining and, in my humble opinion, anyone who doesn’t read them first will be doing themselves a disservice.

(reviewed 22 days after purchase)
Ronny Cooper reviewed on on June 17, 2011
(no rating)
Great Book I really enjoy this series.

I love all of the Cyber Chronicles books. I buy another one as soon as I finish the last one.

I am sure I will check out the other series as soon as I finish this one.

I was captured by this first book and eventually purchased and read all the other eight. The story line is continuous and exciting. Great work T C!

I got hooked on the first book. Have read them all (9 total)and am looking forward to the next book to be published.