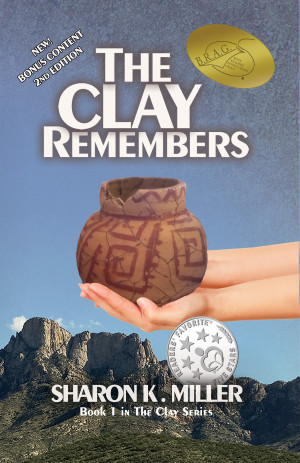 In the Arizona desert, hiding from her abusive husband, Anna Robinson sifts through layers of the past, bringing lost objects to the light of day, while preferring that her own past stays below ground. Voices of the past guide Anna in her quest to restore balance to the present—to find her place in a tradition she can see and hear, and happiness with a man whose past is as haunted as her own. More
Growing up in a household scarred by domestic violence, Anna Robinson had sworn she would never marry a man like her father, that she would never be like her mother and engage in physical battle with a man twice her size. Her response to conflict, then, was to go along to get along, avoiding conflict at all costs.
Being a poor girl in college on a scholarship made her a perfect target for a man like Foster Robinson. She was studying archaeology and because he was majoring in anthropology, Anna thought they would someday have a joint career, working together doing what she believed they both loved. Rich, handsome, and attentive to her in a way she had never experienced, he swept her off her feet. She failed to recognize multiple red flags that should have told her to run—to run far away. By the time she realized what kind of man he really was, it was too late. They were married, and she was a victim of his physical, emotional, and sexual abuse. He refused to allow her to work, and he twice dragged her home from jobs she had taken without his approval or permission.
Finding a way out, she flees to the Southwestern desert where she is finally free to pursue her career. She believes she is safe, at least as long as Foster does not know where she is.
She meets a supportive network of friends in Tucson, something she did not have with Foster, who had managed to isolate her completely. Among those friends is a handsome forensic anthropologist whose green eyes are difficult to ignore. Knowing that any romantic entanglement would be dangerous if Foster found her, Anna does her best to resist Nick Anderson, a man who has his own history of pain and loss.
Participating in a project on a desolate, desert ridge near Tucson, Anna’s peculiar, lifetime talent for engaging with artifacts intensifies. Whenever she uncovers the remains of prehistoric and historic cultures, she is often drawn into those cultures, sharing the experiences of those who came before. At Ramirez Ruin, she finds herself drawn into the stories of two strong women who lived there at different times in history.
Esperanza Ramirez was a nineteenth-century homesteader’s wife, brought there by a husband who could see only his own dream of a large hacienda beneath the towering pinnacles of Pusch Ridge in the Santa Catalina Mountains. Anna learns of Esperanza’s struggle against loneliness and Apache depredations.
Ha-wani, a twelfth-century Hohokam woman, lived there at a transitional time for the Hohokam culture. Where once there had been a large, thriving community spread out along the ridge, now there was a smaller, more fearful community enclosed within a compound wall, a community that was struggling for its very survival in the midst of a drought and against a shaman who was determined to control the village, but even more determined to control Ha-wani.
The remains of a pottery jar, made by Ha-wani is but one of the artifacts that draws Anna into the stories of these women. She knows that Esperanza found the jar intact and used it while she lived there. She knows that Ha-wani made the jar and left it behind for another to find and that the jar made Esperanza’s life a little less lonely, knowing that another woman had lived and struggled there. As Anna tries to reconstruct the jar, she begins to sense the deep love and fulfilment in the lives of the women who preceded her and she draws on their strengths as a means of rebuilding and restoring her own life at the same time.
When her husband finds her, she turns him away with the help of her friends, but not before he meets Nick Anderson and suspects that Anna is involved with him. When he comes back, armed and even more dangerous, she must rely on herself and the strength of those other women to confront him and survive.

Anna’s is the eternal story of a woman struggling to find her voice and power, a story that unearths the legacy of the past, deepening and enriching life in the present.

You have subscribed to alerts for Sharon Miller.