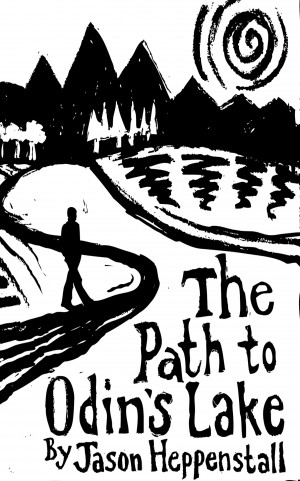 The Path to Odin's Lake

By Jason Heppenstall
Ex-newspaper editor Jason Heppenstall, worn down by the constant drumbeat of dire news in the world, decides to set out on a journey in search of some answers. With not much more than some walking boots, a notebook and a wooden staff he sets off from his old home in Copenhagen with a vague idea to “head north”. More
It isn't long before a series of bizarre coincidences leads him to believe that his journey is being guided towards an ancient lake in Sweden where the Norse god Odin was once worshipped. Along the way he falls foul of the authorities, endures the wettest weather in living memory and meets a peculiar man of the forest who gives him a special gift.

He discovers a modern day Sweden caught between a desire to do good in the world and one struggling to come to terms with the refugees from war-torn Syria and beyond. The writers of the two books in his pack become his two travel companions: one - Marcus Aurelius - is a Roman emperor and Stoic philosopher, the other - Bill Plotkin - is a modern-day American soul-quester, and the two of them together act as inner guides on this most unusual journey. A mixture of travel story, meditation, psychedelic adventure and spiritual quest The Path to Odin’s Lake ponders the deeper meaning of being alive in a chaotic world and - ultimately - offers a vision of hope.
Available ebook formats: epub mobi pdf lrf pdb txt html
Price: $9.99 USD
Buy Add to Library Give as a Gift
How gifting works
Create Widget
Tags: travel peak oil sweden denmark copenhagen spirit adventure
About Jason Heppenstall

Jason Heppenstall grew up in the Midlands and, after studying in London, got his first job working for the Chancellor of the Exchequer in H.M. Treasury’s economic forecasting department. Later he worked as an energy trader in the corporate world before dropping out to spend several years backpacking around the planet and teaching English. During that time he worked as a wildlife volunteer in Guatemala, a fruit picker in Australia and a train factory employee in France. Having studied degrees in economics, computer programming and environmental policy, he settled on journalism as a second career and launched Spain’s first green-focused newspaper. He was later the managing editor of the Copenhagen Post in Denmark and a Scandinavia correspondent for The Guardian newspaper. These days he lives in west Cornwall with his family and is creating a sustainable forest garden on seven acres of woodland. He enjoys mushroom cultivation, sea kayaking and writing his blog.

Reviews of The Path to Odin's Lake by Jason Heppenstall

You have subscribed to alerts for Jason Heppenstall.

You have been added to Jason Heppenstall's favorite list.

You can also sign-up to receive email notifications whenever Jason Heppenstall releases a new book.