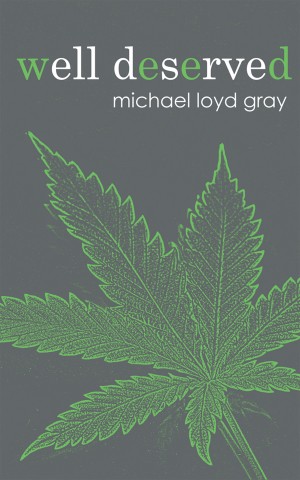 By Michael Loyd Gray
In a narrative with all the clarity and determination of a prophecy, Michael Loyd Gray's Well Deserved chronicles the struggles of four people as they come to the stark realization that their paths are not solitary, but entwined, and their very lives hinge on one shared moment.
Available ebook formats: epub mobi pdf lrf pdb txt html
First 30% Sample: epub mobi (Kindle) lrf more Online Reader
pdb
Price: $3.99 USD
Buy Add to Library Give as a Gift
How gifting works
Create Widget
Tags: crimefiction marijauna drugs
About Michael Loyd Gray

Michael Loyd Gray was born in Jonesboro, Arkansas, in the shadow of Graceland and Elvis Presley, the land of RC Colas and Moon Pies, but grew up in Champaign, Illinois. He earned an MFA in English from Western Michigan University and has taught at colleges and universities in upstate New York, Michigan, Illinois, Wisconsin, and Texas. He graduated from the University of Illinois with a Journalism degree and was a newspaper staff writer in Arizona and Illinois for ten years, conducting the last interview with novelist Erskine Caldwell. He is the winner of the 2005 Alligator Juniper Fiction Prize, the 2005 The Writers Place Award for Fiction. His novel Not Famous Anymore was awarded a grant by the Elizabeth George Foundation and his novel December's Children was a finalist for the 2006 Sol Books Prose Series Prize. A lifelong Chicago Bears and Rolling Stones fan, he lives with two insolent cats, EH and Moonpie.

You have subscribed to alerts for Michael Loyd Gray.

You have been added to Michael Loyd Gray's favorite list.

You can also sign-up to receive email notifications whenever Michael Loyd Gray releases a new book.