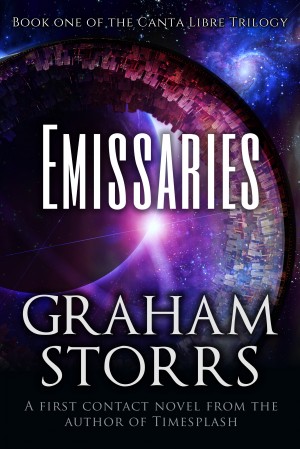 By Graham Storrs
First contact came as a message of friendship from a place so far away Earth could barely reach it. But the UN-led team sent to represent humanity was not the only one. Criminals and unscrupulous governments also wanted to be the first to meet the aliens. The struggle to reap the rewards alien contact might bring would be vicious and deadly. Yet tor the survivors, the real struggle was still ahead More
Aliens.

First contact was a surprise when it came. A silly, childish message of peace and friendship from a place so far away only Earth's newest prototype spaceship, the Canta Libre, could reach it - or so people thought.

The UN-led team that went out to represent humanity was mostly scientists and soldiers, led by General Ramirez, and carrying Ambassador Hartmann to the most momentous meeting in human history. But they were not alone. Other teams went too; one led by Petrov, a gang boss with dreams of technological riches and power beyond measure, the other crewing an ancient ark ship the rest of the world had long since forgotten, its mission changed by an unscrupulous government, its half-human captain, Ken Lee, bitter and heartbroken.

Some, like young Kitty Hamilton and drug designer Mike McBain, were dragged into the race for first contact against their will. Others, like Geoffrey Cejka and physicist Susan Iverson were eager participants. But none of them – not even the military robot – would complete the mission unscathed or unchanged. Some wouldn't complete it at all.

Yet, though the struggle to answer the call of the enigmatic aliens would challenge the hapless travellers to the limits of their endurance, and the struggle to be the first to represent humanity would be vicious and deadly, for the survivors, the real struggle was still to come.
Available ebook formats: epub mobi pdf rtf lrf pdb txt html
First 20% Sample: epub mobi (Kindle) lrf more Online Reader
pdb
Price: $4.99 USD
Buy Add to Library Give as a Gift
How gifting works
Create Widget
Tags: thriller adventure space opera aliens robots first contact saturn omega point placid point space city
About Graham Storrs

About the Series: The Canta Libre Trilogy

First contact triggers a race to the stars and a series of terrible events that lead to an invasion of the Solar System by several alien forces. The crew of the Canta Libre begin their deadly adventure as emissaries of earth, then become supplicants to a powerful alien empire, and finally warriors as they join the battle to save humanity.

Reviews of Emissaries by Graham Storrs