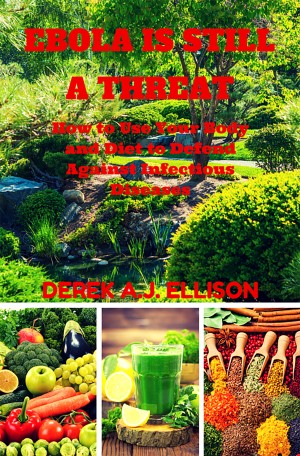 Ebola Is Still A Threat: How to Use Your Body and Diet to Defend Against Infectious Diseases

By Derek A.J. Ellison
With the sudden outbreak of infectious diseases (the world over); there is no better time (than the present) for us to start preparing our bodies to meet any challenge (that might arise) in the easiest and most cost efficient way. This can be done by strengthening our Immune Systems via our diets. The purpose of this book is to clarify what we are up against and how to protect ourselves from it. More
It seems as though we are being bombarded with outbreaks of infectious diseases globally. You would think that with countless lives at stake, more information would be provided on the protective measures that might be available for us to secure ourselves and our loved ones, but they haven’t. That is the purpose of this book. It will clarify (in summary and the simplest terms) what we are up against in the areas of infectious diseases as a whole, as well as the immediate threat posed by the latest strain of the Ebola Virus Disease.
In the book, I also discuss how we can prepare our bodies to meet the challenge (should it arise) in the easiest and most cost efficient ways by strengthening our Immune System's defensive capabilities.
The body is equipped with its own survival mechanism. It operates throughout our systems, both internal and external and it is fueled by way of our diets, as well as those things that we apply to the surface of the body (skin) and hair (of which is absorbed into the body).
We are all naturally inclined by the body (via hunger, thirst, illness, sickness and physical deficiencies) and mind (via beautification and desired attraction) to perform maintenance on it (i.e., the body). This book explains how we can get the best out of our diets, body applications and supplements, while rejuvenating the life sustaining organs that protect us and prolong our existence. I also explain why overcoming infectious diseases, as well as survival from them depends far more on our Immune Systems than vaccines (though some vaccines can play a significant role for many).
It is not uncommon for those who are unaffected by a direct threat to ignore the threat, or not take much concern in the danger, devastation or loss (of life) posed by the threat (to self and to others). In an assumed perfect world, in which many of us have found comfort; it is far easier on the mind, body and spirit to disregard and mentally keep distant whatever we might regard as distant. Unfortunately, this is no longer the case as the Ebola Virus Disease which has reached the USA and several Europe countries with deadly results. Thus, we can no longer overlook the fact that we are now affected; and as stated by one specialist in the field of diseases, “it is only a matter of time before it spirals out of control in the developed world.”
Whether his prediction (or expectation) comes to pass or not, the fact still remains that the current Ebola Virus outbreak is proving to be the deadliest and most widespread strain of the virus the world has experienced.
Using our common sense, most of us can easily pinpoint and explain what we are doing wrong where our health is concerned, yet the majority of us are unwilling to make the necessary changes to improve upon our health. For those who have been neglecting to put in the necessary work (via diet and exercise) to ensure reaching their optimal health, there is no better time to start than now. From here on out, let us not only "live to eat" and "eat to live," but "eat to survive," while enjoying doing so.

The Writer (a native of Brooklyn, NY) has spent 17 years travelling and living abroad in Europe, West, Central and North-east Africa, as well as visiting Palestine/Israel, Jordan and Saudi Arabia to name a few. He has had the opportunity to teach, study and experience the lifestyles, spiritual beliefs, eating habits and cultures practices etc.of the inhabitants of the countries he has visited. He has fallen ill to, suffered and battled the likes Malaria, Typhoid Fever a host of microorganisms, parasites and fungi during his travels; as well as the more common diseases and ailments suffer in his native USA. During his travels he developed a habit of gathering whatever information he found to be interesting, enlightening and helpful; with a fascination developing in the areas of Spirituality, Astrology and alternative/natural medicines in West Africa (where he resided for nearly seven years) as well as their beneficial effects on the illnesses of the body. It is on the foundation of his experiences, coupled with the knowledge gained through his personal studies of the causes, symptoms, nature, treatment and of diseases (and other health issues) that this book was written.

You have subscribed to alerts for Derek A.J. Ellison.

You have been added to Derek A.J. Ellison's favorite list.

You can also sign-up to receive email notifications whenever Derek A.J. Ellison releases a new book.