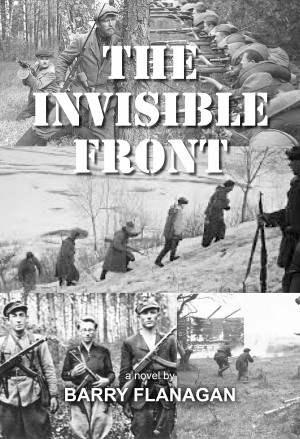 By Barry Flanagan
This is a story of a small group of freedom fighters, based in one of the many resistance camps in Lithuania. They were hailed as heroes by their followers and dubbed The Invisible Front by Soviet Security Forces. More
Its 1944 and Germany are losing the war. The Soviet advance is unparalleled, forcing the Wehrmacht to retreat with great rapidity. After three years of occupation in Lithuania the Germans regroup at the East Prussian town of Goldap leaving behind a legacy of exterminated Jews and a trail of destruction. The Soviets, on the other hand, reclaim the land they called their own in 1940, but the population of Lithuania is demoralised. Many flee as refugees, turning their backs on a second Soviet occupation, while others have no alternative but to stay - their livelihoods depending on it. Then there’s the third group: the freedom fighters, the ones who grit their teeth, curse the Soviets, then pick up their weapons again prepared to move undercover of the forests for the second time and show the Soviets they’re not welcome back in their country. The war in Western Europe may be drawing to a close, but the war in the East is just beginning.

This is a story of a small group of freedom fighters, based in one of the many resistance camps in Lithuania. They were hailed as heroes by their followers and dubbed The Invisible Front by Soviet Security Forces.

Barry Flanagan was born in the coalmining town of Cessnock, located in the Hunter Valley of New South Wales, Australia. Having completed his schooling he worked in the industrial city of Newcastle before forging a career in the Defence Forces with the Royal Australian Air Force (RAAF).

After six years maintaining and servicing the French built, Mirage III supersonic aircraft - including two of those years in Singapore and Malaya - he opted for a new career in the underground coal mining industry. He worked at a number of mines, each one forced to close because of depleted resources. From there he worked as a training consultant for the mining industry in electrical and Occupational Health & Safety followed by a period with a successful engineering company before retiring.

With his partner, Barbara, he now lives in the Macarthur region of New South Wales, an hour’s drive south-west of Sydney.

Reviews of The Invisible Front by Barry Flanagan

You have subscribed to Smashwords Alerts new release notifications for Barry Flanagan.

You have been added to Barry Flanagan's favorite list.

You can also sign-up to receive email notifications whenever Barry Flanagan releases a new book.