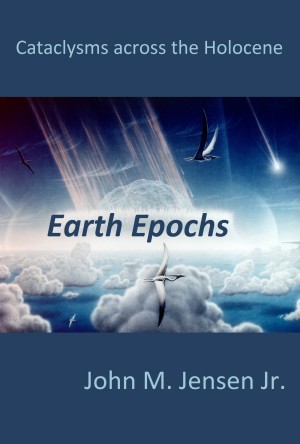 By John M. Jensen, Jr
Earth Epochs looks at major cataclysms across the Holocene, the Earth's Axis Tilt event of 3,448 YBP and its world wide cataclysm. And the Last Great Cataclysm, 7000 Years ago and its catastrophic effects. It also reviews in detail the Younger-Dryas event of 12,900 YBP. In addition, it also makes the case for Giant Humans and Dinosaurs in the Historic Record. More
In this book, I am expecting to prove via catastrophic ocean rise, the geologic column, deep core drills, ice core samples, varve layers, and other readings, that the Earth experiences major and cataclysmic catastrophes including dipole exchange on an irregular short term basis. The geologic column shows the average static or calm periods that are between catastrophes to average about 7,000 years. Many periods are much shorter, some are longer, and a very few are quite long.

Resource search-core drills collectively show strata that changes from limestone (ocean floor) to sandstone (land erosion buildup) to shale (Shallow sea), and hard rock (granites, etc.) then back again. Most levels are between 2' and 14' thick, or roughly 1,000 to 7,000 years in age duration. Proof of strata change on a repeating short cycle basis is called the 'geologic column' and it demonstrates, without question, how dynamic, volcanic, and catastrophic our planet is. The reason we know for certain that super mega cataclysms accompany every change, is that each stratum of the geologic column mostly does not have any transition layer between beds, but changes from an ocean bed (limestone) to some other non-ocean surface, then back to limestone then back to something else on a clean non-transition basis. In addition, magnetic polarity in rocks and geological strata demonstrates pole shifts have caused the poles to be located at many different places on the surface of the Earth at different times.

The Andes and Rockies are NOT old, (comparatively) in geological time as structures like Puma Punku so readily show. The last three levels of civilization are readily apparent to anyone who can read the base blocks, intermediate and top stones of the South American Andes ancient ruins. The same is true about every set of megaliths in the world from Baalbek, to Jerusalem, to the Giza Plateau to South America.

The bottom stones are the largest and the best cut and dressed. The second layer of stones are smaller and less well cut and dressed, and the top layer is generally rough stone to fieldstone in structure and design.

I will be able to prove in this book that many mid-sized dinosaurs lived up into the mid Holocene about 7000 years ago, while small pockets of declining size species survived well up into the modern age. I will present a book full of images, pictographs, pottery, carvings, etc. I will also present articles on recent DNA tests on soft tissue and hemoglobin elements from more than 60 non-fossilized dinosaur bones, some still frozen in place in the great permafrost deepfreeze of the Northern Arctic Polar Regions.

I will prove that hominids of great stature (over 18-24' + tall) lived before and into the Holocene start, and some mid-sized giants (about 12-18’ lived well into the mid Holocene, while smaller giants up to about 10’ lived up into relatively modern time. (3,400 BP) Supporting that fact, I will show that Gravity, as a fixed law does not exist, and what we perceive, as the ‘G’ force is actually the ‘charge density’ of an Electrostatic Field Force. I will show that during the third Ice Melt Pulse, (Ocean Rise) the ambient temperature rose to a level that was at the limits of sustaining human and domestic animal life, and as a result, populations went underground to survive the incredible heat index.

I have discovered some world class artifacts of ancient civilizations, wrote 2 books on the subject; "Ancient Canal Builders" and "Earth Epochs", publishing both of them for FREE.

You have subscribed to alerts for John M. Jensen, Jr.

Would you like to favorite John M. Jensen, Jr?

You have been added to John M. Jensen, Jr's favorite list.