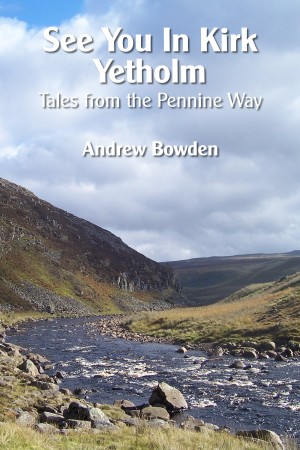 See You In Kirk Yetholm: Tales From The Pennine Way

People like Andrew Bowden. Despite having absolutely no intent at all of walking the whole thing, somehow a two day jaunt in the Yorkshire Dales became an epic journey over several years. The Pennine Way grabbed him by the lapels – or should that be, the Gore-Tex jacket – and made the convincing case for walking between Edale and Kirk Yetholm. Somehow.

And despite regularly being soaked to the bone in heavy rain, almost losing boots in sticky mud, getting stuck in a bog, and – on one memorable occasion – being snowed in, in a remote village in Northumberland, somehow he kept going, got to the end, and lived to tell the tale. See You in Kirk Yetholm is that tale. The tale of a walk that did its uttermost to put him off, but never succeeded.

Price: $3.99
$1.60 USD
Buy with coupon Use the code AGB60 at checkout for 60% off during our site-wide promotion!
(Offer good through May 31, 2020 )
Have a better coupon?
Add to cart, then apply your coupon
Add to Library Give as a Gift
How gifting works
Create Widget
Tags: england hiking walking long distance walking pennines pennine way
About Andrew Bowden

Andrew Bowden was born and raised in Manchester and spent much of his early years being dragged around Etherow Country Park a few miles from his parents house.

After abandoning hiking in his teenage years in favour of spending far too much time in front of computer games, he returned to the hills after settling in London.

Somehow he even finds the time to run a walking based website called Rambling Man (www.ramblingman.org.uk)

You have subscribed to alerts for Andrew Bowden.

You have been added to Andrew Bowden's favorite list.

You can also sign-up to receive email notifications whenever Andrew Bowden releases a new book.