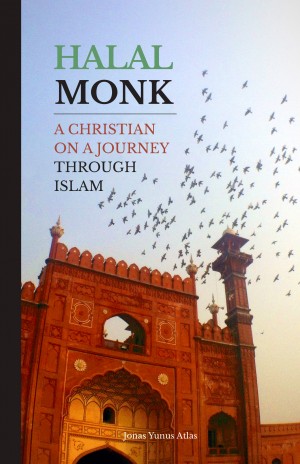 Halal Monk. A Christian on a Journey through Islam.

Attempts of interfaith dialogue often stay away from the more difficult issues and remain somewhat superficial. With his 'Halal Monk' journey, Atlas wanted to go further. He wanted to get to the root of our current tensions. This book collects his most fascinating dialogues at the intersection of culture, society and religion. In between those conversations, some extra light is shed on key concepts of the Islamic tradition and their relevance for today's debates.

Topics as diverse as quranic exegesis, islamic mysticism and islamic feminism are all treated in a nuanced manner. Difficult subjects like islamic fundamentalism and jihad, aren't circumvented but placed within their context and clarified. Aspects of the islamic faith like sharia and ijtihad are explained and juxtaposed with the Christian tradition.

'Halal Monk: A Christian on a Journey through Islam' is one of the most insightful and honest books on Muslim culture, spirituality and theology. A must read for anyone who wants to have a better grasp of the place of islam in the modern world.

“We need many more books like this one. The reader emerges from this study with a real and fresh grasp of a tradition that is in movement, in dialogue with itself and so in transition.” – Rowan Williams, former Archbishop of Canterbury.

"The interviews and reflections in this book offer sensitive, clear and extremely interesting insights into Islam and Islamic thought. The opportunity to 'listen in' on the author's conversations is a distinct privilege." – Marie Dennis, co-president of Pax Christi International.

"The book could not have been written any better by a Muslim - but then it is important that it was written by an upright, self-critical Christian. I will make the book a must-read for my students, both religious and non-religious." – Shaykh Bashir Ahmad Dultz, founding president and shaykh of the German Muslim League.

"Profound understanding among Muslims and Christians is critical for civil health of the 21st century, and this book points in a promising direction." – Rev. William E. Swing, Founder of URI and Former Episcopal Bisshop of California.

--About the author--
Jonas Yunus Atlas is a scholar, mystic and activist from Belgium. For many years he writes and lectures on religion, spirituality and God-focussed life. Jonas was born in a Christian tradition, immersed himself into Eastern religions during his youth, studied philosophy, anthropology and theology at different universities and eventually became active in various types of peace work. His texts, essays and books can be found at www.jonasyunus.net.

Combining his academic background with his experience in activism and blogging, Jonas also initiated the Halal Monk project. During this 'journey of a Christian through Islam', he had openhearted dialogues with influential spiritual figures and important artists from the Islamic world. These fascinating talks on the intersection of culture, society and religion as well as a series of his personal reflections on verses from the Qur'an, can all be found on www.halalmonk.com.

--About the publisher--
Yunus Publishing produces inspiring web and print projects. It mainly publishes the texts and books of Jonas Yunus Atlas (both in English and Dutch) but also maintains his Halal Monk website and projects like thoughtsofgandhi.org, a web tool that allows people to receive weekly Gandhi quotes through a newsletter or various social media.

If you would like to be informed of new publications and web projects of Yunus Publishing, please subscribe to the newsletter on www.yunuspublishing.org.

You have subscribed to alerts for Jonas Yunus Atlas.

You have been added to Jonas Yunus Atlas's favorite list.

You can also sign-up to receive email notifications whenever Jonas Yunus Atlas releases a new book.