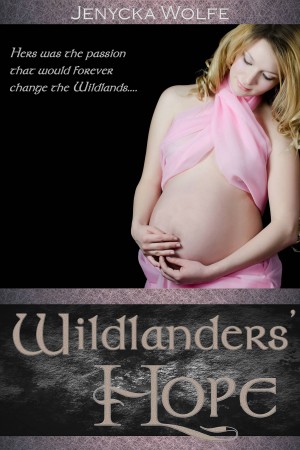 Unwed, pregnant, and marked for death, Niomi Harpechel's only chance for survival lies with the savage Wildlander warriors who were slated to be her executioners. Little does she know that she and her baby might very well be the hope the Wildlands have been desperately seeking. More
For centuries, the Wildlander warriors have kept the forces of the Dark at bay, protecting the gentle nation of Arcadia. But their numbers are decreasing. Between the deadly struggle with the Dark creatures and a lack of female babies born, it’s becoming uncertain if the Wildlander race will continue on past a few more generations.

An unmarried, pregnant woman in Arcadia has two choices: die, or go to work at the laundries, where she will spend her life hidden away from the rest of society. Niomi Harpechel’s family has made the decision for her. She’s to be taken out into the cold winter night and quietly disposed of. When she’s rescued by the fierce barbarian Wildlanders, she sees the opportunity not only to survive, but to have a safe home and a future for her child. During their journey through the mountains, passion flares and Niomi’s body awakens to the true pleasures of love. But will it be enough? No Wildlanders have ever taken an Arcadian-born as a bride. They are considered too weak, too frail, to survive the rigors of life beyond the wall. Can Niomi prove them wrong? Does she represent a new hope for the future of the Wildlands?
Available ebook formats: epub mobi pdf rtf lrf pdb html
First 20% Sample: epub mobi (Kindle) lrf more Online Reader
pdb
Price: $3.99 USD
Buy Add to Library Give as a Gift
How gifting works
Create Widget
Tags: public sex anal sex mmm sex pregnancy erotica high fantasy erotica explicit menage sex graphic sex with pregnant woman mmfm with mm elements rough dominant sex
About Jenycka Wolfe

Jenycka Wolfe has been a teacher, a nurse, a professional journalist, a five-star chef, and, most recently, a private investigator. It was during a stakeout, gathering evidence of one of Canada's wealthiest men's marital infidelity, that she realized her true calling was erotic romance writing. Unfortunately, in her excitement, she gave away her position and the enraged cheater chased her through the streets of Halifax with a tire iron. Jenycka was forced to leap into the icy ocean to escape, and ended up with severe pneumonia and frostbite. Eventually, she had to have three fingers amputated. Now she lives under an assumed name in an undisclosed location, where she has begun to pen her tales.

You have subscribed to Smashwords Alerts new release notifications for Jenycka Wolfe.

You have been added to Jenycka Wolfe's favorite list.

You can also sign-up to receive email notifications whenever Jenycka Wolfe releases a new book.