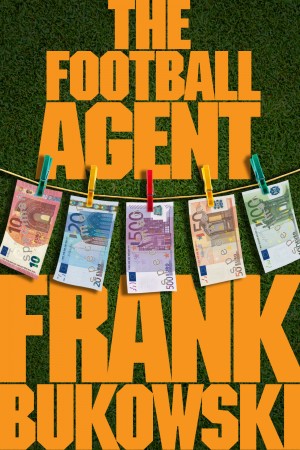 Rich Dinero is a shark among men. A ruthless football agent who’d kill for money. It’s earned him a champagne lifestyle of fast cars, private jets, and women who never say no. Until now. More
Rich Dinero is the world’s richest football agent. His job is turning modest young men into money-grabbing mercenaries earning two hundred grand a week. Three hundred, if he can swing it. Screw the fans. Loyalty is for losers. When Dinero shakes hands with a kid and looks into his eyes, he doesn’t see a young footballer looking back, full of hopes, dreams and aspirations. He sees a piece of livestock to be sold on the market, to the highest bidder. His own cut is a lucrative twenty percent. It’s a racket that’s brought him a champagne lifestyle of fast cars, beautiful women and private jets. The secret to his success? He never takes no for an answer. The word isn't even in his vocabulary. Until he meets Fliss, the pretty young receptionist who won’t play ball. And the game is on.

Frank studied at the Universities in Brighton, East Anglia, and Queens’ College, Cambridge. Two of those august institutions he tricked into awarding him degrees: a BA in Graphic Design, majoring in illustration, and an MA in Creative Writing, where he was lucky enough to be taught by Malcolm Bradbury and Rose Tremain.

Frank now hides out in Norfolk, UK, where it rains 400 days a year. Since marriage, divorce, and the birth of his son landed like a salvo of missiles in the 90’s, Frank has spent the last two decades helping to raise his kid, who recently graduated with his own BA in History, making Frank the proudest dad on the planet. To keep steam on the table and a roof over their heads, Frank has held down a full-time job for more years than he cares to remember at the hated UK loan-shark company UK Cash Cowboys, where he runs their creative studio. Frank looks after a team of copywriters and designers who churn out oceans of junk mail and advertising. Frank loathes the company and its hideous management team of ruthless corporate cyborgs in human form. He describes working there as a slow death of the soul. He once likened it to a ten year prison stretch for a crime he didn’t do. At weekends he gets out on parole, but Mondays come around all too quick.

Frank’s escape plan involves making it as a writer. For over a decade he’s been tunnelling away in secret, writing poetry and short stories in the scraps of time left over. These finally coalesced into his magnum opus, the 700pp collection Sex on the Brain, which he e-pubbed in the fall of 2012.

Frank writes earthy literary fiction leavened with black humour, aiming for laughter in the dark. His latest book, hot off the virtual press in June 2014, is a dystopian novella called Reality TV. Toying with magic realism, Reality TV parodies our obsessions with fame, celebrity, and trashy reality shows. When he’s not writing or banged up in Cowboys Penitentiary, Frank likes to watch quality television. Mostly stuff about fame, celebrity, and trashy reality shows.

You have subscribed to alerts for Frank Bukowski.

You have been added to Frank Bukowski's favorite list.

You can also sign-up to receive email notifications whenever Frank Bukowski releases a new book.