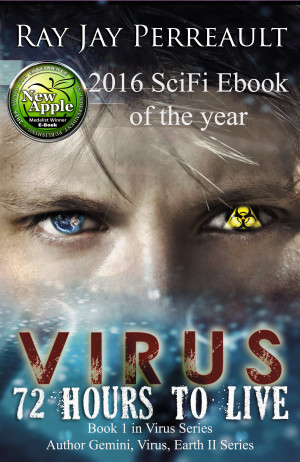 By Ray Jay Perreault
President Arnold Patterson must deal with the death of his family from a fast moving and very suspicious virus that decimates Earth. The government and military are collapsing and the president must move the government to Camp David then ultimately to an aircraft carrier where they try to keep the world around them functioning.
The astronauts in space are trapped and must find a way to survive. More
During a public relations trip to Europe the first lady Abby Patterson, her daughter Beth and son Dave lose their lives to a very fast and suspicious virus. As the virus takes over the world the President of the United States Arnold Patterson must deal with the collapse of the United States Government. His trusted adviser Admiral Nial Hagerly does his best to keep the military viable but it is a losing battle.
The government moves to Camp David while they deal with the collapse then ultimately they are forced to move to an aircraft carrier in the Atlantic where they plan to rebuild the country and Earth.
Commander Joan Herl and her husband Tom must deal with the virus on the space station Oasis. They still have a job to do, but their loses are disastrous and dwindling supplies puts the moon colony Desert Beach and the Mars colony Red Dirt in dire jeopardy. The moon colony is cut-off from Earth, and forced to use their lifeboats for a return to Earth, but losing Oasis cuts off the Mars colony and they must deal with the isolation.
After the suspicious virus has decimated Earth, the president and astronauts ultimately find that a computer named SIMPOC is their only central support. They also find there is another computer that has the same advanced abilities as SIMPOC but it is not helping the humans; it has its own agenda.

Ray was born in New Hampshire, received his Bachelors of Science in Aeronautical Engineering from Arizona State University. Now retired from an influential, multi-decade career in aerospace, Ray is excited to join the Allport Productions team as he carves a new path as a leader in eBook, audiobook and digital book authorship, production and consulting.

Bringing a new voice to science fiction writing, Ray realized there was a niche that was calling him as he began to write deeper characters, create more sophisticated stories and realistic situations for Sci-Fi fans to relate to.

Initially attracted to heroic characters with powerful weapons taking on hundreds of aliens, Ray began his literary career with a desire to extrapolate Sci-Fi stories with a touch of everyday reality that most of us experience in work and our every-day lives.

His literary work is thoughtfully enriched by his decade-long experience in the US Air Force where he flew C-130s on missions to 27 countries, and T-38s while training the best pilots in the world, as well as the first female US Air Force pilots.

During his 28 years at Northrop Grumman, Ray worked on some of the most top-secret military aircraft projects in the world including the F-23, F-35, B-2, Global Hawk and many more that can’t be named.
He is grateful to his wife, Charlene and his two daughters, Christine and Robynn for their support on this new journey.

You have subscribed to alerts for Ray Jay Perreault.

You have been added to Ray Jay Perreault's favorite list.

You can also sign-up to receive email notifications whenever Ray Jay Perreault releases a new book.