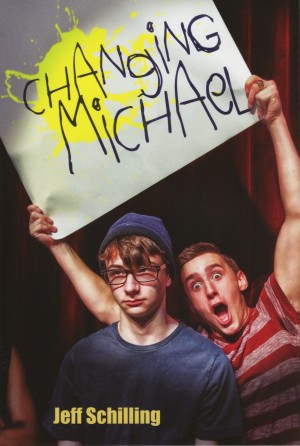 By Jeff Schilling
An entertaining teen novel that even adults can enjoy. --Gary Longwell, YA Librarian

It's been a while since I've seen young adult fiction done quite this well. --Stuart Krause, Teacher

Does what all great stories do: challenges the way we think about ourselves and our relationships. --Christine Avery, English Teacher at Eaglecrest High School More
Matthew knows how things work. He’s pretty much an expert.

For example: friends. Friendship requires both give and take, and Matthew strongly prefers taking. The solution is close acquaintances—people who think you’re their friend because you nod and act interested in whatever the hell they’re talking about.

School? Perfectly pleasant as long as you don’t pay attention.

Mom? Award yourself a point for each hands-on-hips or young man huff. Wear her down until you can get what you want.

The general rule: The less anyone knows about you, the better. But even someone as clever as Matthew needs practice.

That’s where Michael comes in.

Consequently, he’s the kind of kid who gets the crap beaten out of him on a regular basis.
So one day, Matthew, out of the kindness of his heart, decides to help Michael out. Turn his life around. Teach him how to make his life as great as Matthew’s.

Before long, Matthew is helping Michael screw with his NASCAR-loving stepfather. He’s spreading rumors to convince the population of Alexander High School that Michael is a serious badass. He weaves his way into the lives of Michael’s estranged dad, and even Chrissy, the half-sister Michael never even knew he had.

But what if Michael isn’t grateful for all of Matthew’s hard work? What if he actually likes who he is? Why the hell would he, and for that matter, why should Matthew even care?

Read along with the clever musings of our humble narrator while a couple of kids struggle with issues of identity in hilarious (if disastrous) ways.
Available ebook formats: epub
Price: $5.99 USD
Buy Add to Library Give as a Gift
How gifting works
Create Widget
Tags: gay high school identity geek nerd makeover family trouble
About Jeff Schilling

Jeff Schilling was born in San Diego, California, but grew up in Falls Church, Virginia. He remembers lying in bed, listening to his father read The Hobbit to him and can still recall how it felt to hear that story for the first time. And although he’s always wished he was someone who knew exactly what he wanted to do from a very early age, he wasn’t. But he did love music, reading, and football. He was quiet and unremarkable during his middle and high school years. After graduation, he attended Virginia Tech and chose English as his major because he still liked to read and nothing else seemed terribly appealing. While attending Virginia Tech, he managed to take one Creative Writing course, but was secretly put out when his professor didn’t feel his work was astonishing.

After college, he worked as a waiter, dialysis clerk, purchasing assistant, case manager, and in a number of cubes before deciding he’d better find something he liked. During this time, he lived in Richmond, Virginia, Denver, Colorado and Freeport, Maine. He still loved books and music, but decided to write since he didn’t play an instrument, is terrified of doing anything in front of an audience, and isn’t good at staying up late. Unfortunately, he wasn’t able to quit his day job to pursue this endeavor, because no one was willing (or able) to support him. He did, however, manage to break free of the cubicle and has worked with children for the past ten years, writing when he can.

Mr. Schilling claims if he’d known it would take this much work and so many years to achieve his goal, he might have given up long ago. After many manuscripts, two halfway decent, self-published books, and hundreds of rejection letters, he was fortunate enough to come to the attention of Bruce Bortz, publisher of Bancroft Press. Without the infinite patience of Mr. Bortz and his tremendously gifted editor (Harrison Demchick, The Listeners), Changing Michael would not exist. (The patience and perseverance the author cultivated during the edit and rewrite process, the author believes, is probably good for him, he adds.).

He is currently living in Colorado with his wife, daughter, house rabbit, and two guinea pigs. He hopes to write a few more books . . . if anyone’s interested. He also hopes that his vague and unremarkable biography might inspire other closeted artists. If it could happen to him, it could happen to anybody. Really.

You have subscribed to alerts for Jeff Schilling.

You have been added to Jeff Schilling's favorite list.

You can also sign-up to receive email notifications whenever Jeff Schilling releases a new book.