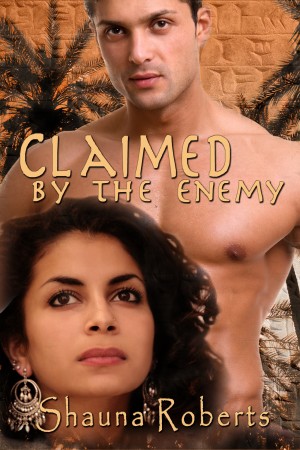 Claimed by the Enemy

By Shauna Roberts
Love, intrigue, and adventure in ancient Mesopotamia. Two survivors of Sargon the Great's destruction of the great city of Eridu, a lonely princess and an unwilling soldier, meet when Sargon conquers the city of Susa. She trusts few people, and he lies to her from the start. But circumstances bring them together as both try to stay alive and protect her children in the chaos of the conquered city. More
Crown Princess Nindalla knows the terrifying power of Sargon of Akkad’s army: Ten years ago, it destroyed her home city and killed her parents. Now the nightmare is happening again. The Akkadians conquer her new home, Susa; make her a widow; and strip her of her rank. Nindalla vows to protect her children from her enemies by any means necessary, including marrying whoever can shield them best. With plots swirling around her, can she trust her instincts to tell friends from foes?

Farm boy Ur-sag-enki was forced to become a soldier in the Akkadian army ten years ago after it destroyed his home and left him with nothing. When the Akkadians conquer Susa, he is awarded its governorship. He looks forward to settling down to the normal family life he craves. First, though, he must keep control of Susa despite enemies who exploit his inexperience, and he must gain legitimacy by persuading beautiful former princess Nindalla to marry him. But can he win her heart when it was his hand that struck down her husband?

Winner of the 2014 National Readers Choice Award for "Novel with Romantic Elements."
Winner of the 2015 Romancing the Novel Published Author Contest in the "Ancient/Medieval/Renaissance" category.

Shauna Roberts is an author of fantasy, science fiction, historical fiction, and romance in various lengths.

She grew up in Beavercreek, Ohio, and has lived in Philadelphia, Chicago, Washington, D.C., New Orleans, and southern California. She currently lives in North Carolina near the Blue Ridge Mountains.

She was a medical copy editor and an award-winning freelance science and medical writer for 21 years before retiring to write fiction.

She attended the Clarion Science Fiction and Fantasy Writers’ Workshop in 2009 and later served on the Clarion Foundation Board of Directors for three years. In 2011 she won the Speculative Literature Foundation’s Older Writers’ Grant.

You have subscribed to alerts for Shauna Roberts.

You have been added to Shauna Roberts's favorite list.

You can also sign-up to receive email notifications whenever Shauna Roberts releases a new book.