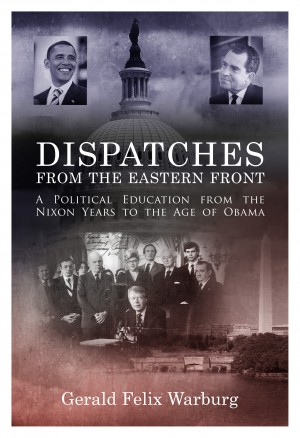 Dispatches from the Eastern Front: A Political Education from the Nixon Years to the Age of Obama

By Gerald Felix Warburg
"A vivid eyewitness history of our recent political past. It is an engaging narrative for anyone who likes a good story and a wonderfully practical book for politicians and public servants--or any young person considering a public service career. Terrific." --John Casey, Winner of the National Book Award for SPARTINA More
How does one arrive at a life in politics and policy? What happens to one’s ideals when confronted with the reality that the only way to get things done in Washington is compromise? Who are the men and women who help shape our national agenda, and what drives their work? Dispatches From the Eastern Front provides fascinating, intensely personal, yet universal answers to these central questions. Recounting four decades inside Washington politics, Gerald Felix Warburg brings remarkable candor to a most unusual memoir. An idealistic California baby boomer transported to the intimidating world of Capitol Hill policymaking at a young age, Warburg finds himself working to reform nuclear energy, strategic arms control, and foreign policy. As his access and power grow, greater challenges loom: how to maintain principles while cutting deals, and how to balance public purpose with private interests. An eclectic career reveals the slow and often painful development of emotional intelligence for work at the highest reaches of the public arena.
Available ebook formats: epub
Price: $9.99 USD
Buy Add to Library Give as a Gift
How gifting works
Create Widget
Tags: politics journalism president intrigue obama nixon white house civil service lobbying
About Gerald Felix Warburg

Gerald Felix Warburg has worked in Washington on intelligence, trade, and international security matters since the Ford Administration. He has assisted several executive branch agencies, and served on the staff of leadership in both the United States Senate and House of Representatives, where he was a principal draftsman of the Nuclear Nonproliferation Act of 1978 and other U.S. foreign policy initiatives. In addition, he has provided counsel to several American presidential campaigns and to two democratically-elected presidents of the Republic of China on Taiwan.

As a visiting lecturer, he has taught history and government courses at Hampshire College in Amherst, Massachusetts, and with both Stanford and Georgetown university programs. The author of Conflict and Consensus: The Struggle Between the President and Congress to Shape U.S. Foreign Policy (Harper/Collins), he is currently Executive Vice President for a Washington government relations firm.

A native of Marin County, California, Mr. Warburg holds an undergraduate degree from Hampshire College, and an advanced degree from Stanford University. He and his family currently reside in Virginia.

The Mandarin Club is his first novel.

Reviews of Dispatches from the Eastern Front: A Political Education from the Nixon Years to the Age of Obama by Gerald Felix Warburg

You have subscribed to alerts for Gerald Felix Warburg.

You have been added to Gerald Felix Warburg's favorite list.

You can also sign-up to receive email notifications whenever Gerald Felix Warburg releases a new book.