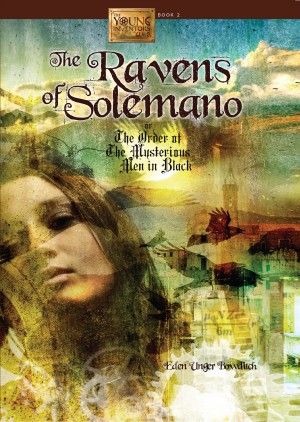 The note read simply: They Will Be On The Train…

It has been mere days since the brilliant children of the Young Inventors Guild slipped through the fingers of the horrible Komar Romak. They have escaped with their lovely and caring schoolteacher, Miss Brett; with their long-absent parents; and with their bizarre captors, or protectors, or both – the Mysterious Men in Black. Now they are traveling by train, destined for parts unknown.

But a note in the hands of a dead man in a New York tunnel guarantees that safety is but an illusion. When the children’s world is blown open, life will never be the same again.

The children – Jasper and Lucy Modest, from London; Wallace Banneker, from New York; Noah Canto-Sagas, from Toronto; and Faye Vigyanveta, from New Delhi – soon find themselves in the ancient Italian village of Solemano and being pulled ever deeper into a centuries old mystery. As they maneuver ever closer to the truth of the Mysterious Men in Black, and turn out new inventions and gadgets to help on their quest one terrible fact remains clear:

Komar Romak is still out there. He is still after them, for reasons they cannot begin to imagine. And he knows exactly where they are…

From the rolling plains of America to the wide-open waters of the Atlantic, through the Strait of Gibraltar to the remarkable village in the hills of Abruzzo, Italy, The Ravens of Solemano or The Order of the Mysterious Men in Black, the second book of the Young Inventors Guild trilogy, is an adventure like no other.
Available ebook formats: epub
Price: $6.99 USD
Buy Add to Library Give as a Gift
How gifting works
Create Widget
Tags: scifi adventure fantasy magic science steampunk invention tesla young inventors guild
About Eden Unger Bowditch

Eden Unger Bowditch has been writing since she was very small—in fact, since she could use her brain to think of something to say. She wrote while attaining her undergraduate degree from the University of California, Berkeley, and she wrote songs as lead singer of the band Enormous. She has written stories and plays and shopping lists and screenplays and dreams and poems—and also books about her longtime Baltimore home. She has been a journalist, as well as a welder, and an editor. The Atomic Weight of Secrets is her first young adult novel, and she has been as excited writing it as she hopes you are reading it.

Eden grew up in Chicago, and later lived both in Los Angeles and in Paris. She now lives with her family (husband and three children) in Cairo, Egypt. But that's another story entirely . . .

About the Series: The Young Inventors Guild 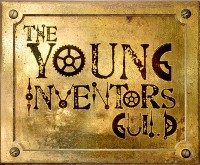 A splash of Steampunk at the turn of the century, a middle-grade series that features a different kind of magic--science!

You have subscribed to Smashwords Alerts new release notifications for Eden Unger Bowditch.

You have been added to Eden Unger Bowditch's favorite list.

You can also sign-up to receive email notifications whenever Eden Unger Bowditch releases a new book.