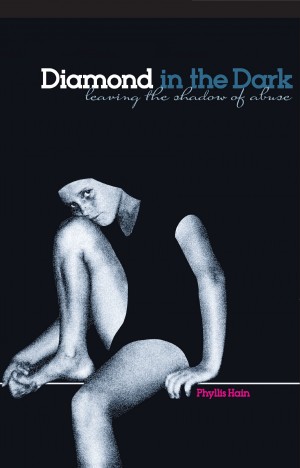 Diamond in the Dark: Leaving the Shadow of Abuse

By Phyllis Hain
A remarkably honest memoir of abuse, lies, and murder. Phyllis Hain's ultimate escape from a life of domestic violence into the role of survivor and advocate is an inspiration for anyone. With frank description and southern humor, Phyllis tackles the best and worst of her life experiences. More
A blond, green-eyed child of a Marine sent home from World War II suffering from acute brain trauma, Phyllis Hain frankly chronicles her struggle to survive devastating domestic violence and spousal abuse by creating two personas; one for the darkness of home, the other for the brilliance of life. This fascinating journey of an abuse survivor and national advocate will not just steal readers’ hearts but leave an indelible, searing mark on readers’ minds—and on society at large. More specifically, Phyllis’s captivating story will serve as a superb guide to abuse (child, spousal, pet, etc.) because readers will be able to see themselves in her story. The professional analysis at the end of the book adds quite a lot and provides a great amount of fodder for spousal abuse support groups (and others) to discuss. Whether it is mental, physical, or sexual abuse, Diamond in the Dark relates to them all. Diamond in the Dark can help many to heal, or even help abuse victims to speak up.
Available ebook formats: epub
Price: $9.99 USD
Buy Add to Library Give as a Gift
How gifting works
Create Widget
Tags: rape advocacy domestic violence social issues assault rape survivor
About Phyllis Hain

Phyllis Hain was born in Alabama and grew up on the Gulf Coast of Florida. During twenty-one years of work as a US Navy sexual assault response coordinator (SARC) and a family advocacy educator, she taught well over 20,000 students. Working alongside military and community law enforcement, she helped educate first-responders on how to properly document incidents and how to provide sensitive, effective treatment and support to victims of sexual assault. She responded to hundreds, if not thousands, of victims in crisis—all during a career in which she received hundreds of hours of training in the field of domestic violence, child abuse, child sexual abuse, sexual assault, and victim intervention, and the correlation between animal abuse and domestic violence. Inspired by interviewing, and responding to, many courageous victims and survivors of abuses, she decided to undergo what turned out to be the multiyear ordeal of writing a memoir about her own tumultuous life as the victim of child abuse, child sexual abuse, sexual assault, and spousal abuse.

Reviews of Diamond in the Dark: Leaving the Shadow of Abuse by Phyllis Hain

You have subscribed to alerts for Phyllis Hain.

You have been added to Phyllis Hain's favorite list.

You can also sign-up to receive email notifications whenever Phyllis Hain releases a new book.