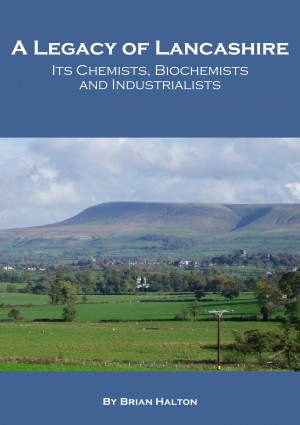 A Legacy of Lancashire: Its Chemists, Biochemists and Industrialists

Brian Halton arrived in New Zealand in September 1968. He was born in Lancashire and educated there and in London prior to entering the University of Southampton in 1963. He gained Bachelor’s and Doctoral degrees (1963 and 1966), then experience at the University of Florida prior to appointment as Assistant Professor in 1967. He transferred to the Victoria University of Wellington in New Zealand in 1968 and spent his career teaching and researching there. Initially a lecturer in chemistry, he rose to become professor, and has published some 240 articles in his chosen field. He has been an Emeritus Professor of Chemistry for 14 years.
Brian has served on various international committees and boards, and remains a referee for many prominent international chemistry periodicals. He was the first of two Honorary Fellow of the New Zealand Institute of Chemistry elected in the 21st century. He edited the flagship journal Chemistry in New Zealand for some ten years from 2001. In his retirement, he has provided an autobiography that surveys his fifty years as a practising organic chemist and written a history of the Chemistry Department at Victoria over its first 100 years from the viewpoint of the chemist rather than a historian. These books are available for free download from the School of Chemical & Physical Sciences website: www.victoria.ac.nz/scps/history
The present booklet had its origin in comments made during Brian’s hospitalisations in March and December 2014, and appears now in its second edition following further cardiac events. He has lived with serious heart disease for 35 years through eight infarcts, numerous angioplasties, cardioversion and some unexplained events. He recounts here the trials and tribulations and successes in his life since 1983

You have subscribed to alerts for Brian Halton.

You have been added to Brian Halton's favorite list.

You can also sign-up to receive email notifications whenever Brian Halton releases a new book.