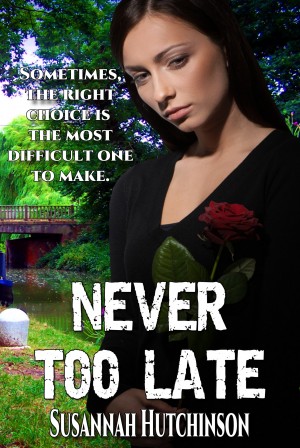 Sometimes, the right choice is the most difficult one to make.

Tina Blythe has led a difficult life, working hard to make something of herself. From the moment she met her future husband, she knew her happiness was assured. Clive was the answer to her prayers . . . More
Please Note: This book is intended for mature audiences (ages 18 and above) only and also contains heavy language.

Sometimes, the right choice is the most difficult one to make.

Tina Blythe has led a difficult life, working hard to make something of herself. From the moment she met her future husband, she knew her happiness was assured. Clive was the answer to her prayers, a dream she thought came true.

It doesn't take long for Clive to show his true colours, and her life takes an unexpected turn. Her husband has turned into someone she barely recognises, a mere shell of the man she married. Yearning for a fresh start, Tina is willing to do anything to give meaning to the life she lives. She refuses to allow herself to become a victim once again.

Determined to find a means to an end, she devises a plan that will help her gain her freedom. She knows it will be difficult, but somehow, someway, Tina is resolute. She will get past Clive’s harsh hold by any means necessary. Only then will she be able to lead the life she’s always wanted.
Available ebook formats: epub mobi pdf lrf pdb html
First 20% Sample: epub mobi (Kindle) lrf more Online Reader
pdb
Price: $4.99 USD
Buy Add to Library Give as a Gift
How gifting works
Create Widget
Tags: thriller crime crime drama suspense drama mystery social issues crime thriller
About Susannah Hutchinson

Susannah Hutchinson was born and raised in Sunderland in the North East of England. She spent most of her childhood with either a book in her hand or riding horses. She moved to Norfolk in 1990, where she now lives with her long-term partner, artist Gerald Marsland.

Susannah turned to writing in the hopes that one day she would find a publisher and embark on a successful career as an author. She’s written several short stories and has one printed in a local magazine. Another was accepted and read in a podcast in the USA. Her ambition is to become a novelist.

At the age of 46, she has finished writing what will be her soon-to-be released debut novel titled, Never Too Late. Her genre of choice is Social Thriller. As well as entertaining the reader, she tries to send out a message within her work, while bringing social issues to the forefront of people’s minds. She is also a conservationist and supports several animal charities. She enjoys traditional art, reading almost any genre of books, and is very interested in Forensics and Psychology.

Reviews of Never Too Late by Susannah Hutchinson

You have subscribed to alerts for Susannah Hutchinson.

You have been added to Susannah Hutchinson's favorite list.

You can also sign-up to receive email notifications whenever Susannah Hutchinson releases a new book.