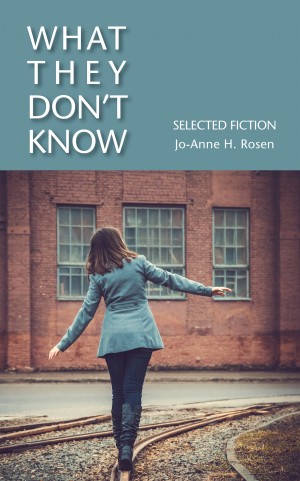 What They Don't Know: Selected Fiction

“What They Don't Know is what perhaps you do know, though you may not know you know it. Rosen's profound understanding of her characters is evident on every page, in every nuance of voice and gesture and speech. The actors in these beautiful, often sad stories carry with them complex histories of desire and pain, often longing for what they can't or shouldn't have. You've met them, fathers and mothers, daughters, sisters, uncles, lovers, presented here with humor and dignity, with a keen and dispassionate eye, reminiscent of another great Canadian storyteller, Rosen's cast will surprise you, instant by instant.”
– Daniel Coshnear, Occupy & Other Love Stories

“In Rosen's book, amidst gorgeous imagery, people we care about stumble through attraction and betrayal. And move over Portnoy, with your raw liver in a milk bottle. Let a girl show you how it's done. The title story contains the most imaginative portrayal of self-pleasuring you'll ever read.”
– Norma Watkins, The Last Resort: Taking the Mississippi Cure

“A young woman prepares to declare her independence from her parents only to discover that her mother is secretly struggling for her own autonomy; a free-spirited bartender deftly plays off the two women who try to hold him; an elderly husband tries to protect a favorite vacation spot from the encroachments of youth and time. Each situation opens a window onto another universal aspect of human character. Children, young people and the aged all have a voice here, and almost every one of them either hides a secret or uncovers someone else’s. Rosen’s writing is crisp and precise. Without a single excess word she paints a series of varied pictures ranging from the German countryside, a working-class Toronto neighborhood, or the American open road. Each story is a pleasure to read, and the collection as a whole demonstrates Rosen’s talent in a dazzling variety of times, places and themes.”
– Ruhama Veltfort, Strange Attractors
Available ebook formats: epub mobi lrf pdb txt html
First 20% Sample: epub mobi (Kindle) lrf more Online Reader
pdb
Price: $3.99 USD
Buy Add to Library Give as a Gift
How gifting works
Create Widget
Tags: child abuse toronto grief and loss miami germans and jews schnapzahlfest
About Jo-Anne Rosen

Jo-Anne Rosen is an author of short fiction. Her stories have been published in print and online journals in Canada and the U.S.

Selected stories from a mini-collection, The Luckiest Man Alive, were performed at the New Short Fiction Series in Hollywood, California, on October 12, 2014.

Born in Toronto in 1944, transplanted to Miami, Florida at age 13, she was awarded a scholarship and fellowship to the University of Miami and earned a BA and MA in English literature. In the 70s she traveled all over the U.S. and Europe, by thumb and camper van. She lived and worked in San Francisco almost 30 years, as well as in Oregon and Germany. Her home since 1998 has been in Petaluma, California.

Jo-Anne is self-employed as a book and web designer and small press publisher. She established Wordrunner Publishing Services in the 80s, a print chapbook service in the 90s, and the literary zine Wordrunner eChapbooks in 2008.

In 2007 she was awarded a two-week writing residency at Soapstone in Oregon. She is presently co-editor of the Sonoma County Literary Update.

Reviews of What They Don't Know: Selected Fiction by Jo-Anne Rosen

You have subscribed to alerts for Jo-Anne Rosen.

You have been added to Jo-Anne Rosen's favorite list.

You can also sign-up to receive email notifications whenever Jo-Anne Rosen releases a new book.