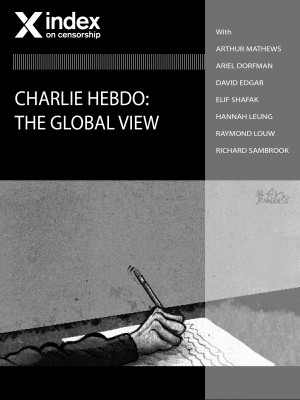 When people are escaping danger or feel threatened, the natural inclination is to stay quiet and under the radar. Some bravely do not. They intend to alert the world to a situation that is unfolding, to attempt to protect others, or just give an alternative view. Our writers talk about why and how censorship and outrage is being used to quiet debate; how fear and threats of writers and journalists has sometimes been followed by killings of the messengers.

For playwright Ariel Dorfman, the deaths at Charlie Hebdo brought back memories of death squads in Chile and Argentina, while for Turkish novelist Elif Shafak it brought home the need to speak up for democracy, and co-existence. All our writers bring views from around the world about the future of debate and journalism in their region.
As Shafak says so wisely: “The response to a book, is another book. The response to a cartoon is another cartoon. Words need to be answered with words.”

Index on Censorship magazine has been published since 1972, featuring some of the biggest names in literature, journalism and activism

Reviews of Charlie Hebdo: The Global View by IndexMagazine

You have subscribed to Smashwords Alerts new release notifications for IndexMagazine.

You can also sign-up to receive email notifications whenever IndexMagazine releases a new book.