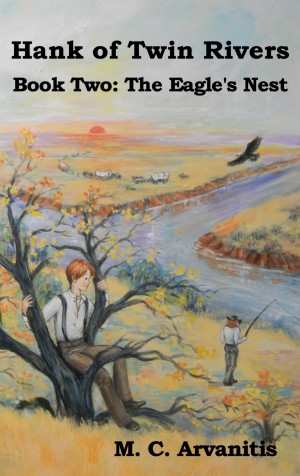 By M. C. Arvanitis
Hank, sixteen, has settled with his Pa and Uncle Mac where the North and South Platte Rivers merge. Pa and Major Beams set up a trading post between the Mormon and Oregon Trails. Conflict arises between Pa and Hank when Pa remarries. Hank makes friends with a preacher’s daughter which does not set well with her father or Hank's stepmother. Hank runs away rather than go to an Eastern school. More
Hank, now sixteen, settled with his Pa and Uncle Mac in the Platte Valley three years earlier. His father set up a trading post where immigrants traveling the Mormon or Oregon Trails stop for supplies. In the past Pa and Hank did not get along, although they had settled their main differences two years ago, but conflict arises between them again when Pa remarries. Hank's Uncle Mac is always there to ease the tension.
When life gets too tedious, Hank finds comfort in his "Eagle’s Nest, " a tall cottonwood tree that grows in the valley overlooking the merging North and South Platte Rivers. Here he watches the growth of the town. New people settle near Twin Rivers including Preacher Twiddle and his large family. Hank likes the daughter, Becca. Although Becca’s father forbids them to be together, they become good friends and only she knows about his eagle’s nest.
Much to his stepmother's dismay, Hank makes friends with a Pawnee boy. She refuses to allow him in her house. Straight-laced and prejudiced, she also refuses to help a slave family escape from bounty hunters.
The winter is hard and long. Food is scarce. When Hank goes hunting rabbits in the valley, he gets lost in a sudden blizzard and tangles with a mysterious wild creature.
Encouraged by his new wife, Pa enrolls Hank in an Eastern school where he can prepare to be a doctor. Hank refuses to go. He runs away with horse wranglers who hunt for wild horses in Western Nebraska. When he comes home with his new horse, Lady, he finds that Becca’s father has taken her and her family back to Missouri.
Available ebook formats: epub pdf rtf lrf pdb txt html
First 10% Sample: epub lrf pdb Online Reader
Price: $2.99 USD
Buy Add to Library Give as a Gift
How gifting works
Create Widget
Tags: young adult indian american homesteading pioneer history oregon trail american frontier platte river western american history nebraska territory teenage action adventure
About M. C. Arvanitis

M. C. Arvanitis resides in Freemont, Nebraska. She has a degree in Early Childhood Education. She taught preschool and early elementary for over thirty years until her retirement two years ago. She now spends her time writing elementary chapter books and Young Adult novels. Her short stories have been published in Skipping Stones Magazine, Totline Teaching Tales (Warren Publishing Co.), and Building Blocks for Bright Beginnings.

You have subscribed to Smashwords Alerts new release notifications for M. C. Arvanitis.

You have been added to M. C. Arvanitis's favorite list.

You can also sign-up to receive email notifications whenever M. C. Arvanitis releases a new book.