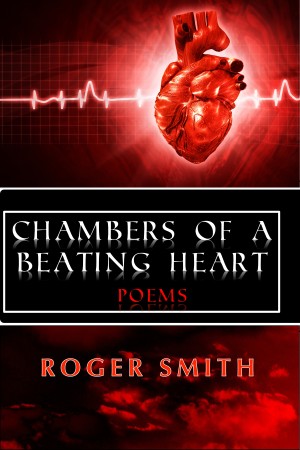 Chambers of a Beating Heart

Chambers of a Beating Heart is an original compilation of poetry blending four dominant emotions that drive us all. Love, pain, desire, and hope. Compressed and fully expressed through the tar and mortar melting pot of creativity and imagery from a New York upcoming poet. More
From the captivating creative mind of Roger Smith comes his second collection of poetry which draws inspiration from the world of literature, current events, and matters of the heart. A rustic rhetoric and vernacular helps pull and twist readers through the veins and arteries of an intimate experience bringing them to the forefront and beating organ of poetry and humanity. The rotating mind of a cancer survivor, the erotic loins of a Christian in conflict, and the overwhelming tennis match of rage being a Black Bajan-American husband and father in today's society. Chambers of a Beating Heart, is an amalgamation of daily life interactions and thoughts that plague everyone, through the eyes of a seasoned poet.

Born in Brooklyn, New York of Bajan descent, Roger Smith struggled through his teens and twenties with considering himself as a poet. With thoughts of the cliché that poetry “doesn’t put food on the table”, he switched majors and directions continuously during his early years as an undergraduate, until finally declaring himself an English major at Molloy College. As a member of the Honorary Society Lambda Iota Tau, Smith graduated Cum Laude with a BA in English in 2014 while juggling a full-time job with a Telecommunications giant and the commitments of family life. Married since 2002, with three daughters, Smith, a baptized member of the Seventh Day Adventist Church, scribes with an intense personal voice and illustrates poetry that generates instant images to his readers, inspirational thoughts of love, yet still deals with the ugly truths of reality. His poetry has been published in the Molloy College Literary Magazine, and he has performed at various venues in New York and plans on continuing to share his gift with the world through being what God has made him, a poet.

You have subscribed to alerts for Roger Smith.

You have been added to Roger Smith's favorite list.

You can also sign-up to receive email notifications whenever Roger Smith releases a new book.