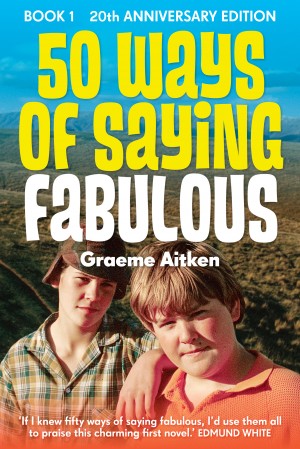 By Graeme Aitken
Billy-Boy preferred culture to cows, but when you’re the only son of a rugby-loving Kiwi farmer, you buckle down and do your chores! And escape into a fantasy world of cross-dressing and theatricals at every other opportunity. '50 Ways of Saying Fabulous' is funny, touching and unforgettably evocative of childhood lost. More
Sweet, fat, theatrical Billy-Boy was never cut out to be a farmer, but as his father’s only son he’s obliged to try. The cows are wayward and the chores are gruelling, but Billy finds escape in a fantasy world. A place where the turnip paddock becomes a lunar landscape, a lavender bed jacket a slinky space suit, a cow’s tail a head of beautiful blonde hair, and where Billy can become Judy Robinson, heroine of TV’s 'Lost in Space'.

But in an isolated conservative farming community in 1970s New Zealand, not everyone approves of Billy’s transformation. On the brink of adolescence, Billy is beginning to discover that growing up is far more complicated and confusing than he could ever have imagined. While the mysteries of sex confound him, emotions are unleashed which urge Billy to betray those closest to him.

'50 Ways of Saying Fabulous' is a poignant and endearingly comic novel. Anyone who grew up in a small town, grew up feeling that they didn’t fit in, or simply grew up will find this book funny, touching and unforgettably evocative of childhood lost.

Praise for '50 Ways of Saying Fabulous':

'I loved this funny sad tale of growing up a sissy in New Zealand. Graeme Aitken proves that even the most extraordinary events can occur to wonderfully ordinary people. If I knew fifty ways of saying fabulous, I’d use them all to praise this charming first novel.’ EDMUND WHITE

'A sort of gay Adrian Mole ... There are laughs aplenty but also moments of agony ... Told with bare faced honesty, it is a warm, cruel, funny tale.' THE SUNDAY AGE

'Touching and sad, '50 Ways of Saying Fabulous' also has some very funny moments.' THE TIMES

'An entertainment, a gentle, poignant story of a fat boy who fantasises romance and glamour without yet having a name for what he is ... Aitken writes with a distinctive voice, one that is wonderfully evocative.' DENNIS ALTMAN, THE AGE

'... an important work ... What Aitken has demonstrated fabulously is his skill in the art of telling a good story ... his honesty and fearlessness in confronting those squirmy adolescent secrets is to be admired.' CANBERRA TIMES
Download: epub
Price: Free! USD
Add to Library
Create Widget
Tags: gay sex gay fiction 1970s first gay experience am i gay gay fiction books coming of age novels books made into movies new zealand books
About Graeme Aitken

Graeme Aitken is best known for his two previous bestselling novels '50 Ways of Saying Fabulous' and 'Vanity Fierce, published by Random House Australia and by Hodder Headline in the UK. '50 Ways of Saying Fabulous' was adapted into a feature film in New Zealand and was an official selection for the 2005 Toronto International Film Festival. It also became a popular hit on the queer film festival circuit. Most recently Graeme has been writing and self-publishing his own e-books (‘The Indignities’ series and ‘Top Mark’).
In addition to his work as an author, Graeme has also worked as the manager of Sydney’s specialist LGBT bookshop for the past 23 years. There are now only a handful of these shops left in the world. With all this experience, he is an Australian authority on LGBT books/writing and he edited 'The Penguin Book of Gay Australian Writing' in 2002. Graeme is also extremely knowledgeable about publishing (he has experience with all facets – mainstream, small press, and indie self-publishing) and the current state of the publishing/bookselling industry.
Graeme likes to share topical information about writing, GLBT literature, books, publishing, and bookselling on social media.

About the Series: 50 Ways of Saying Fabulous

A new edition of '50 Ways of Saying Fabulous' to celebrate the 20th year of its original publication. 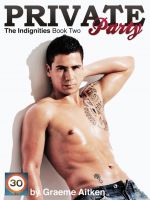 You have subscribed to alerts for Graeme Aitken.

You have been added to Graeme Aitken's favorite list.

You can also sign-up to receive email notifications whenever Graeme Aitken releases a new book.