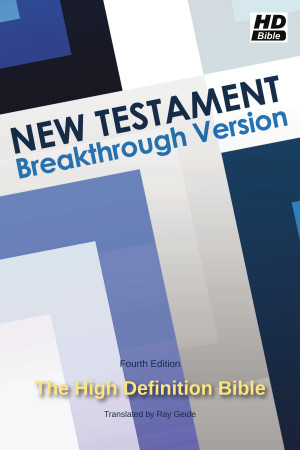 Experience detail and clarity never before seen in an English Bible.

The blurry black and white images in today’s Bibles prevent readers from seeing the true picture of God’s message.

Whether you are a newbie or an old saint, you will benefit from this vibrant high quality image of God’s inspired words.

Use the Breakthrough Version as a stand-alone Bible or add it to your arsenal of Bible study tools.

Because the Bible should be Correct

Because the Bible should be for Everyone

When Ray Geide was in the sixth grade, a friend told him, "I tried to read the Bible once, but there were too many thees and thous. I gave up." When he heard this, he wondered why someone had not updated the Bible and changed the thees and thous to “you” so that unchurched people like his friend could read it.

At that time he didn’t know that for almost fifty years God would prepare him to do just that and much more.

For many years, he taught about the Bible and its words in many churches. He pastored 5 churches.

In 1992 God called him to go to Russia as a missionary. For nine years he lived among the Russian people and became fluent in their language. This increased his Greek abilities because the Russian language is similar in structure and use to Greek.

While in Russia, he started a software development company, Super Win Software, Inc., to support his family and ministry. He often spent days and weeks solving complex problems with simple lines of code.

After returning to the United States, he worked as a translator for sixteen years in a nonprofit organization and for two years in a business.

God brought all these factors and many more together to build a more accurate Bible that unchurched people can read.

To learn more about Ray Geide and/or to read his articles about the Bible and its words, go to breakthroughversion.com.

You have subscribed to alerts for Ray Geide.

You have been added to Ray Geide's favorite list.

You can also sign-up to receive email notifications whenever Ray Geide releases a new book.