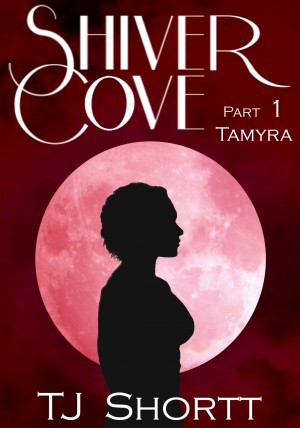 By TJ Shortt
Rated 4.67/5 based on 3 reviews
Something stalks the streets of Shiver Cove. Are Tamyra's deepest fears of her werewolf side killing coming true or has something far more sinister than she can imagine made Shiver Cove its home? More
Tamyra never considered the family curse to be real. Seriously, who even believes in werewolves? Waking up, naked, in a stranger’s backyard sets Tamyra’s reality straight and it becomes obvious staying in the big city is no longer an option.
Desperate to protect her full moon secret Tamyra moves to mysterious Shiver Cove.
Being a painfully shy girl starting her senior year, Tamyra’s fears of being left an outsider vanish when she meets an alluring and popular guy. Unfortunately, a ruthless bully has her heart set on him too.
Despite bullying threats, Tamyra finds she’s falling in love and is unnerved by her hopes his intentions extend beyond just friendly.
Adding to Tamyra’s torment, a new darkness is terrorizing Shiver Cove. Could she be the thing stalking the streets of Shiver Cove or has something far more sinister than she can imagine come to town?
Download: epub mobi (Kindle) pdf more Online Reader
rtf lrf pdb txt
Price: Free! USD
Add to Library
Create Widget
Tags: horror young adult supernatural werewolf teen full moon supernatural abilities strong female characters bully at school
About TJ Shortt

TJ Shortt, a perpetual teenager, has been fascinated by the supernatural her entire life. She spends her days dispatching trucks and plotting out how to kill people… on paper. In 2010 she attended the Borderlands Press Writer’s Bootcamp. She enjoys participating in local and on-line writing groups improving her craft. She lives in the suburbs of Toronto, Canada, with her husband and four-legged children. The Shiver Cove series are her first novels.

Downloaded and my daughters read while on vacation. They really enjoyed it, and with the Shiver Cove website saying part 2 is on the way I'm sure they'll want that one too. Hopefully it will be available on here as well.
Thanks!

I loved Shiver Cove, Tamyra!
I know I haven't read all of the werewolf books out there...there are tonnes, but I out of all the ones that I have read, I felt that Shiver Cove was incredibly unique.
Now characters. I really liked the main character Tamyra. I have an irregular spelled name, so I love it when characters have names that are spelled differently too, it automatically makes me like them a little bit more. Second, she was so shy at the beginning. I can also relate to that!
By the end of the book I thought she was an admirable character and I really liked her.
Sal...oh that mysterious sexy Sal. Did I mention mysterious, well he was, very. I absolutely loved him. He was kind of sketchy at times, but I couldn't help being drawn to him...probably because Tamyra couldn't either.
The story itself was awesome! It totally made me remember the one time I was stuck being the new girl and how hard it was. I loved that it was a realistic story even though becoming a werewolf might not be that believable if it really happened. I didn't know that there was going to be a sequel until I went onto the Shiver Cove website and saw it on there, and boy was I relieved. Shiver Cove ends in a way that will surely have you anxious for more!
I would recommend Shiver Cove to all paranormal fans, especially ones partial to werewolves, and I'd also recommend it to someone who wants to read a paranormal but doesn't know where to start. This would be a fantastic book to read if you've never read anything paranormal before, and it's good for those of us who read it like crazy too.

You have subscribed to alerts for TJ Shortt.

You have been added to TJ Shortt's favorite list.

You can also sign-up to receive email notifications whenever TJ Shortt releases a new book.