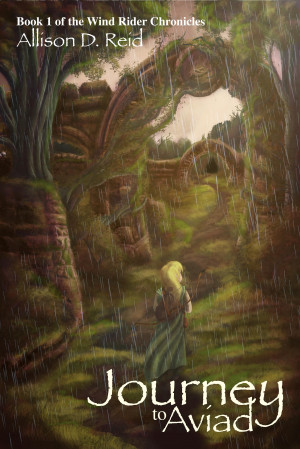 By Allison D. Reid
Rated 4.57/5 based on 7 reviews
Elowyn lifts a strange silvery object from a woodland stream. Is it a medallion? A coin? Looking about curiously, she also finds a helm, a bow, broken arrows…and blood drenched soil. Something terrible has happened in this usually peaceful wood. Her world—the whole world—is about to change forever… More
Threatening clouds and fierce storms besiege the city of Tyroc. More frequent and powerful than ordinary storms, young Elowyn, a weaver’s daughter living in the outskirts of the city, senses something disturbing and unnatural about them. She soon realizes that the storms are but a warning sign of much more frightening things yet to come.

Terrifying wolf-like creatures emerge from the depths of the wilderness at the bidding of a dark master. His name found only among the crumbling pages of ancient texts, the re-appearance of Alazoth and his Hounds is a dark omen for the people of Tyroc and beyond. Only legends remain of the heroes and prophets whose blood was shed ages ago to banish him into the abyss, which should have remained his prison for all time. How he has been released is a mystery, but all the old stories agree that death and destruction are sure to follow.

With the Hounds inching closer each day, the city of Tyroc caught up in religious and political turmoil, and her home life no less turbulent, Elowyn has nothing left to rely on but her meager courage and a budding faith in Aviad, the Creator. She and her sister, Morganne, set out on a remarkable journey that challenges everything they have ever known about themselves, the world, and the path that Aviad has laid out for them.
Download: epub mobi (Kindle) pdf more Online Reader
rtf lrf pdb txt
Price: Free! USD
Add to Library
Create Widget
Tags: adventure fantasy christian christian fantasy medieval fantasy epic adventure fantasy
About Allison D. Reid

Allison D. Reid was born in Cincinnati, Ohio. Her love for medieval fantasy was sparked by the Narnia Chronicles by C.S. Lewis, which fed both her imagination and her spiritual development. When at the age of thirteen her family moved to Germany, her passion for medieval history and legend only increased, and she found herself captivated by the ancient towns and castles of Europe.

Allison returned to the United States to study art and writing at Hampshire College in Amherst, MA. She earned her B.A. under the tutelage of the well-renowned and prolific writer Andrew Salkey, a student of her other great inspiration, and the father of fantasy, J. R. R. Tolkien. After graduating from Hampshire College, Allison moved to Connecticut. There she got the opportunity to attend seminary and further explore her faith before returning to her home state of Ohio.

Allison now lives in the Miami Valley area with her husband and children. She continues to work on her first published series while taking care of her family, editing for other independent writers, and managing a home business.

About the Series: Wind Rider Chronicles

The Wind Rider Chronicles is an uplifting Christian fantasy series that blends traditional fantasy elements with spiritual themes. These compelling adventure stories include quests, journeys, heroes, villains, fantastical creatures, and the eternal struggle between good and evil. What they don't have is graphic violence, foul language, or any other explicit material. Every book in the Wind Rider Chronicles is a clean read that can be enjoyed by fantasy lovers of all ages.

What an inspiring book! With so much darkness around us all on a daily basis, it's easy to get swallowed up in it and become too overwhelmed. This book has allowed me to reach beyond my own darkness and rise above it! To bring hope back to the forefront where it belongs! Thank you, Allison!

OMG! This was so good, man! I think that I have finally found the female equivalent to Stephen R. Donaldson in Allison D. Reid. Now, don't get me wrong - this is written from a far different perspective and with a far different mindset than Mr. Donaldson's fantasies, but it is rather the writing style (minus the many obscure words that the former writer likes to employ) and the flawless and ineffable wordsmithing that brings Mr. Donaldson to mind when I read Ms. Reid. I will most certainly be reading the rest of this series!

A perfect book to curl up with and escape for a while. Long descriptions bring the world to life, and the perspective of the main character is well fleshed out. The book also strengthened me in faith, especially near the end of the story. There is power in looking at biblical truths through a different lens, so to speak. It allows them to strike home again where familiar stories sometimes fail to do so. Or at least that's how I experience it :). Great book, I'm ready to start reading the sequel!

Loved it! I'm not good at reviews, so I'm just going to say why I enjoyed Journey to Aviad so much.
I love the genres of fantasy and sci-fi, so right away I was at least interested enough to check it out. The blurb sounded very interesting and got me to download the book, but it was the author's imagination, strong main characters, and world-building that kept me reading!
This is reminiscent of Lord of the Rings and The Lion, the Witch, & the Wardrobe with its allegorical whimsy and subtle, yet clear spiritual inferences. All the same, Journey to Aviad doesn't copy and stands refreshingly by its own merit! I highly recommend this to all who enjoy profanity-free, adventurous fantasy tales. Well-done, Ms. Reid!

A journey of discovery for the reader and the main characters.
For the main characters with regards to breaking free from their normal lives and finding themselves fleeing from evil, being summoned by the new Young King's Advisor/ Tutor.
For the reader with regards the 'Who' and/or 'What' Aviad is.
The few violent scenes included are carefully worded to avoid upsetting young readers.
The story is continued in the next book - Ancient Voices: Into the Depths

A story of Elowyn, a young, willful child, who enjoys sleeping in the woods, away from her family. Her journey begins shortly after a messenger of some sort is killed the previous night. She finds a strange coin, stumbles across the messenger's prints, and fearing for her safety, returns home to find her sister weaving. Later that night, as another storm comes in, she wakes to find the ghost of the man who was killed.

Fearing a curse, or worse, (ha! I made a rhyme!) Elowyn returns to the woods to dispose of the coin. Along the way, Alazoth's Hounds, the beasts that killed the man in the woods, accost her, but she is saved by a young man, Einar, who turns out to be part of some rebel group.

This is all taking place during a sort of regime change. The sovereign has died suddenly, and though he left two sons, one seems unfit to lead, and the other is not yet old enough, so there is some political turmoil, which ties into the oncoming blackness--the coming of Alazoth, Master of Destruction.

I do have some complaints, the usual complaints. There was too much explaining (sometimes, but not all the time), which made it feel like someone was recounting events that yet someone else had experienced. This kept me from feeling directly connected to the tale on occasion. It was almost like I was a third party to whom the tale was being related, also, as is the case with a ton of books meow-a-days, and that includes indie and mainstream, too much would and could, which also kept me at arm's length, and, of course, too many sentences beginning with conjunctions--if a sentence has to begin with a conjunction, the previous sentence probably shouldn't have ended, right? Overall, it really felt like a friend was recounting their DnD adventures to me, which isn't terrible, of course.

On the plus side, none of my personal complaints ruin the story. It just wasn't a 5 star book for me. It is a wonderful tale, and I think, young adults especially will enjoy sinking their claws into the adventure of Elowyn. This is perhaps the best possible compliment I can give: I do recommend reading this tale.

I was quickly drawn into Journey to Aviad (Wind Rider Chronicles Book 1). Even though the book is written in the third person, the author skillfully lets the reader into the mind of the main characters, Elowyn and her sister Morganne. Elowyn is a free spirit who loves to spend her time in the forest near Tyroc and ride the wind on the branches of the tallest trees. But something unnatural is happening in Tyroc and the girls flee putting their faith in Aviad, the Creator. Morganne uses a book given to her by her monk tutor to read about the Prophets and the rise of Alazoth.

Though there are religious overtones, this book is not preachy. It is a tale of adventure with strong female protagonists who try to find their way to Minhaven and struggle against the rising evil. Both girls feel a calling from Aviad but do not understand what His purpose is for them.

The pace is steady drawing the reader into the story with many characters, subplots, and underlying themes. I so enjoyed the book, that I quickly purchase the sequel, wanting to know what happens next to the young girls. I highly recommend Journey to Aviad to those who enjoy allegorical tales set in medieval times.

You have subscribed to alerts for Allison D. Reid.

You have been added to Allison D. Reid's favorite list.

You can also sign-up to receive email notifications whenever Allison D. Reid releases a new book.