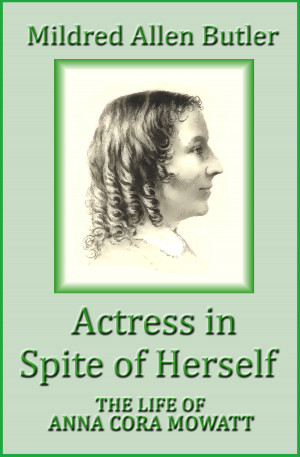 Actress in Spite of Herself: The Life of Anna Cora Mowatt

“High school girls will find this an enthralling story of Anna Cora Mowatt, who ... was the first American to make the status of a woman in the theater both respectable and admirable. As a child, Anna enjoyed acting and performing in plays at home, but had no designs on becoming a professional because of society’s sentiments.... Then bankruptcy threatened her lavish estate and she turned to public reading of poetry, at which she was supremely successful. Success in playwriting led to her serious involvement in the theater.” --Best Sellers

“Married at 15, [Anna] flitted through a happy social life for a while, wrote pleasant articles for magazines of the time ... and, after her husband's health and fortune failed, supported them both by acting succesfully in this country and England.” --Seattle Daily Times

Mildred Butler Engdahl, who published under her maiden name Mildred Allen Butler, was the mother of writer Sylvia Engdahl. She had a B.A. from Wellesley College and an M.A. in Drama from the University of Oregon, and had worked both as a high school English teacher and as a director of community theaters. Late in her life she wrote several historical books for teens as well as articles for scholarly magazines. She died in 1987 at the age of ninety.

You have subscribed to alerts for Mildred Allen Butler.

You have been added to Mildred Allen Butler's favorite list.

You can also sign-up to receive email notifications whenever Mildred Allen Butler releases a new book.