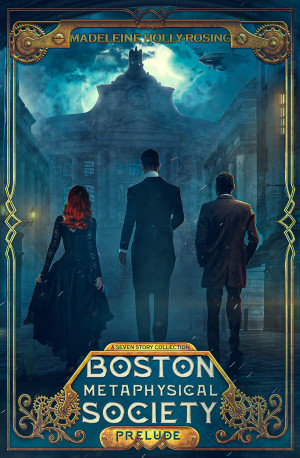 Discover the life of Medium and Spirit Photographer, Andrew O’Sullivan, before he went to work for ex-Pinkerton detective, Samuel Hunter in The Devil Within. Search for demons (human and otherwise) alongside Granville Woods in The Demons of Liberty Row. And learn why Caitlin O’Sullivan must hide who she is from those closest to her in The Secret of Kage House.

Compiled together for the first time are seven stories based on the popular comic Boston Metaphysical Society. The collection also includes Steampunk Rat and The Secret in addition to the short stories, The Clockwork Man (published in eSteampunk Magazine) and The Way Home (previously published in the A1/Atomic Press Anthology). All stories are prequels to the comic and do not contain any spoilers.

Her novel, Boston Metaphysical Society: A Storm of Secrets, won the Silver medal in the 2019 Feathered Quill Books Awards in the Scifi/Fantasy category and overall top pick.

Other comic projects include the short story, The Scout which is part of The 4th Monkey anthology, The Sanctuary (The Edgar Allan Poe Chronicles anthology), The Marriage Counselor (The Cthulhu is Hard to Spell anthology) and the upcoming The Airship Pirate (The Rum Row anthology), and The Birth (Stan Yak Vampire anthology).