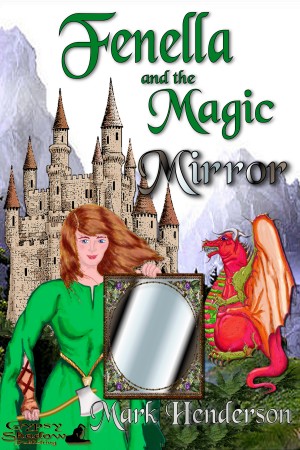 Fenella and the Magic Mirror

By Mark P. Henderson
Fenella is officially a damsel, but she’s the despair of her parents, who want to marry her to young Sir Mallicose. Big, muscular, dark, scruffy and bold, Fenella would rather chop logs and shoot arrows than embroider a tapestry, and she isn’t interested in Sir Mallicose at all.

After retiring from a career in medicine and university teaching, Mark P. Henderson moved to the Derbyshire Peak District in 2002 and started to write fiction and collect local folktales. Several of his short stories and poems have appeared in magazines and anthologies. His books, released by various publishers, include an anthology of short stories (Rope Trick; 2008), a children’s story (Fenella and the Magic Mirror; 2009), a study of the origin and evolution of a local legend (Murders in the Winnats Pass; 2010), a collection of 62 traditional Peak District stories (Folktales of the Peak District; 2011), a collection of puns in verse and prose (Cruel and Unusual Punnishments; 2016), a one-act play (Forget it, it’s History; 2017), and a second novel (National Cake Day in Ruritania; 2018). The publishers of the last-named have given him a contract for another novel, The Engklimastat, due to appear in 2019. He’s in increasing demand as a storyteller to adult audiences around North-West England, and as an editor and a creative writing tutor.

You have subscribed to alerts for Mark P. Henderson.

You have been added to Mark P. Henderson's favorite list.

You can also sign-up to receive email notifications whenever Mark P. Henderson releases a new book.