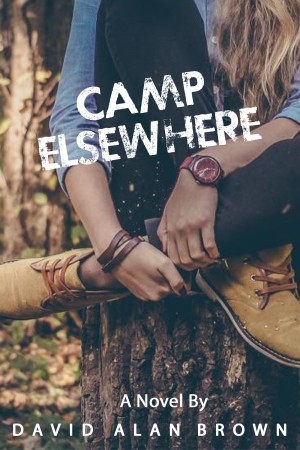 By David Alan Brown
17-year-old Nora wants to stay sober, but she's not very motivated by life. She enrolls in a summer self-discovery retreat and can't possibly see how she will fit in with the eager and positive participants. When she happens upon a counselor from a camp for sick kids across the lake, she's inspired to try harder. But life's challenges push Nora to an edge she promised she never go near again. More
There’s more to staying sober than not drinking.

After 17-year-old Nora smashes her car into the neighbor’s Winnebago during a blackout, she knows she can’t drink anymore. She misses the last semester of high school to undergo treatment, joins AA and is under constant surveillance by her mother.

Depressed, stuck and cynical, Nora enrolls in a summer self-discovery retreat only to meet her roommate, Racheleen, a poster girl for sobriety and everything positive. Expected to climb rock walls with a smile, meet and greet the rest of the outcasts and, worst of all, open up in group, Nora can’t possibly see how she’s going to make it through let alone get beyond the first three steps.

Wandering the woods during “introspective time” she spies a skinny-dipping counselor from a camp for sick kids across the lake, only to actually meet him face to face the next day. Nora is inspired and suddenly her attitude takes a sharp turn. She finally feels ready to take that moral inventory, admit her wrongs and change her character. But when she finds out Nick has a backstory as well, one that feeds right into the tragedy that led to Nora’s drinking, a relapse comes calling. And when her friends admit there was more to her accident than Nora knows, she is pushed over an edge she promised she’d never go near again.
Available ebook formats: epub mobi pdf rtf lrf pdb txt html
First 15% Sample: epub mobi (Kindle) lrf more Online Reader
pdb
Price: $2.99 USD
Buy Add to Library Give as a Gift
How gifting works
Create Widget
Tags: romance cancer young adult leadership recovery teen self improvement alcohol addiction john green
About David Alan Brown

An author of non-fiction, young adult fiction, stage plays and more, David Alan Brown earned his BFA in Film and Television, with a writing emphasis, from New York University. He has worked with young people in leadership and personal development for many years and travels as an inspirational speaker. His play Lily’s Blue will receive its World Premier at the Alleyway Theater (Buffalo, NY) in February, 2018. It was included in the Landing Theatre’s 2015 New American Voices Reading Series and was a semi-finalist in Kitchen Dog Theater’s 2014 New Works Festival. In 2009 The Manhattan Theatre Source chose It Is What It Is, a full length drama, for its Playground Development Series. His comedy shorts have been performed by The Actor’s Project of New York and Frogs With Fangs Comedy Troupe. He is the published author of two nonfiction books (The Self-Help Paradox and Answer The Call), and has also written a YA novel, numerous short stories and freelance journalism through American Media Distributors. He lives in Indianapolis with his wife and daughters.

Review
Karl Anthony reviewed on June 2, 2015
(no rating)
I just downloaded David Alan Brown's new book. I love his writing and his spirit and looking forward to reading his latest inspiration.

You have subscribed to Smashwords Alerts new release notifications for David Alan Brown.

You have been added to David Alan Brown's favorite list.

You can also sign-up to receive email notifications whenever David Alan Brown releases a new book.