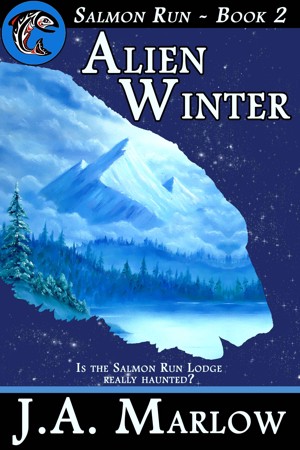 By J.A. Marlow
Rated 3.00/5 based on 1 reviews
A haunted lodge and lurking aliens? The Salmon Run Lodge needs a good cleaning. Hard to do with the plumbing and power constantly going out. Then there are the strange unexplained noises. Nanuk struggles with his own problems. The Admiral insists he take along a new arrival to the Earth mission no matter how it disrupt his scientific human observations.
How can alien and human worlds not collide? More
A haunted lodge and lurking aliens?

The Salmon Run Lodge needs a good cleaning. Hard to accomplish with the plumbing and power constantly going out. Then there are the strange unexplained noises. When Zack heads for school for the first time he discovers that the local kids are as crazy as the other inhabitants of Salmon Run.

Problems abound for the local aliens, as well. Nanuk wants to continue his scientific human observations. Hard to do when the Admiral insists he take along a new arrival to the Earth mission. The only one doing well is Yenni, who heads out with new equipment to use in his studies.

How can alien and human worlds not collide?

Welcome to Salmon Run, Alaska! A place of wild animals, wild lands, and wild inhabitants...oh, and native legends come alive and an interplanetary alien conflict at their backdoor. A fun contemporary science fiction series for teens, young adults, and adults of all ages.

The books in the Salmon Run series in order:
Night of the Aurora
Alien Winter
The Singing Lakes
Secret Illusions
Specter of the White Death
Aurora Equinox
Breakup - Alaska Style
The Legend of Crazy Uncle George

It's said I was launched into space from birth and I haven't been back to Earth since.

As a reader I love science fiction with great plots, interesting characters, exotic locales, all accompanied by a sense of wonder with optimistic endings. As a writer, I love the same.

Alien Winter is an enjoyable read; however, I didn’t find it to be as good as its predecessor. It suffers from a common problem of a second story in a series, it is trying to bridge the introduction of the characters and main conflicts in the first story to the next major conflict in the third story by giving the reader some character information and small details that may be used later on. I’ve seen it happen numerous times.

The main conflict was too similar to the one in Night of the Aurora for my taste. I wasn’t at all surprised by the source or resolution.

Part of the secondary conflict didn’t get quite the attention I would have like to have seen. There were several hints at some things not being what they appear to be, which intrigues me, but they are just that – hints. With the teaser saying that “native legends come alive”, I was hoping to see a bit more. (Okay, I have a personal interest in seeing this one followed up on, Native Lore fascinates me.)

The new character, Amber, feels .. tacked on, not as well fleshed out as the others. I know she is there to add to the second conflict, but I found her distracting at this point. Also, There is a reference to a joke or something done to her that is never followed up on.

Was there anything I did like? Yes. The main characters continue to develop nicely. I loved seeing the human’s reaction to being the subjects instead of the observers. Watching all of the characters go through the steps of this intricate dance of what to say and how much to say is fun. The descriptions of the scenes are great and show the author’s familiarity with the area. And the hints given of things not seen have done exactly what they were meant to do, get me interested in reading book #3.

Overall, not the strongest work I have seen J.A. Marlow do, but still worth reading. ((See what happens when you set the bar so high?))

You have subscribed to alerts for J.A. Marlow.

You have been added to J.A. Marlow's favorite list.

You can also sign-up to receive email notifications whenever J.A. Marlow releases a new book.