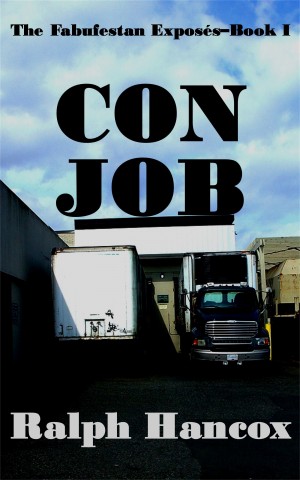 By Ralph Hancox
Rated 4.50/5 based on 2 reviews
A TV documentary crew discover that things are not quite as they appear as they investigate the scourge of drug trafficking in North America. As production begins, the paroled “ex-con” asked to head the creative team faces some personal setbacks, while the company finds itself battling unknown enemies. To get at the truth on all fronts, they learn that they must all look hard at the evidence. More
EXPOSING THE SCOURGE OF DRUG TRAFFICKING

Gregor “Legs” Morowitz, on parole and virtually destitute, is offered his old job back at a Canadian boutique documentary and advertising company. The owners want him to head the team investigating the illegal drug trade in North America for a new TV documentary series, Look at the Evidence. As production begins, Legs faces a wary, even hostile, crew, and then a series of personal setbacks. At the same time, the company finds itself battling unknown enemies on multiple fronts, forcing the owners to take decisive, but sometimes wrong-headed action.

In this first book of The Fabufestan Exposés, it becomes increasingly clear that things are not quite as they appear, and to get at the truth, they must all look hard at the evidence.
Available ebook formats: epub mobi lrf pdb html
First 20% Sample: epub mobi (Kindle) lrf more Online Reader
pdb
Price: $8.99 USD
Buy Add to Library Give as a Gift
How gifting works
Create Widget
Tags: smuggling drug lords law enforcement crime punishment drug smuggling penal institution drug trafficking narcotics trade addiction and crime
About Ralph Hancox

After retiring from a long, distinguished career in the publishing industry, Ralph Hancox continues to write memoirs and novels from his mountain top aerie in Victoria, British Columbia.

Start reading his books chapter by chapter on Wattpad: https://www.wattpad.com/user/RalphHancox

About the Series: The Fabufestan Exposés

Intrigue, scandal, murder and mayhem ... it's all in a day's work as the Fabufestan documentary crew investigate some of society's greatest ills.

Also in Series: The Fabufestan Exposés

Reviews of Con Job: The Fabufestan Exposés–Book I by Ralph Hancox

In the tradition of black/white mystery movies and vintage paperbacks Con Job may be read at breakneck speed with details left to sort themselves out - which they do. A team of investigative film-makers is targeting the trans-border drug traffic and comes closer to the bull's eye than expected. The cast reminds me of a British TV series I have been watching; I look forward to Bill Nighy playing the team's boss Vince. Don't worry if it's not always clear who is who - the characters also will sort themselves out in time for the second book.
Along the way the reader gains some insights into the narcotics hegemony and the Canadian criminal justice system. So a little education and a lot of entertainment.

Filmmakers wanting to work on a series about the illicit drug trade in Canada and The United States seek permission to interview the warden of Michigan State Penitentiary. They make a promise they might not be able to keep.
Con Job tells the story of the production of the documentary with fast-paced dialogue which is informative and easy to follow. It’s full of information about equipment, challenges related to office space, fire codes, and group dynamics. The crew worries that the competition will steal their ideas. They have cash flow problems. Three threatening letters are worrying. Who can they trust?
The arrival of Gregor “Legs” Morrowitz adds another level of anxiety. Most of the film crew like him, but not all. Legs is an asset as he’s just out of prison and his three years in jail gave him first-hand experience of a penal institution.
However, Legs inadvertently breaks a requirement of the parole board and is sent to a halfway house. The crew realizes they need him, and his court appearance is tension filled. There is lots happening in the courtroom and knowledge of past conversations between the judge and Legs’s lawyer have the crew sweating bullets.
There’s action on both sides of the border, bad things are happening and it’s telling when the filmmakers decide they won’t use the words “shoot” or “fire” during filming.
Con Job is full of interesting characters and the dialogue suggests that an insider is doing the writing. I look forward to reading Scandalous, the second book in the series.

You have subscribed to Smashwords Alerts new release notifications for Ralph Hancox.

You have been added to Ralph Hancox's favorite list.

You can also sign-up to receive email notifications whenever Ralph Hancox releases a new book.