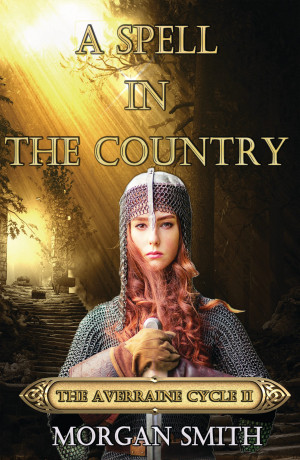 A Spell in the Country Book Two of the Averraine Cycle

Lured into treason and only narrowly escaping the gallows, Keridwen was desperate to build some kind of life for herself. But between demons bent on death and mayhem, treachery at the very heart of the kingdom, and a prince who had every right to nurse a grudge against her, what were the odds that she could stay out of trouble for long?
Available ebook formats: epub mobi pdf lrf pdb txt html
Price: $2.99 USD
Buy Add to Library Give as a Gift
How gifting works
Create Widget
Tags: demons wicca medieval swords and sorcery women warriors new adult coming of age fantasy military fantasy celtic fantasy
About Morgan Smith

Morgan Smith has been a goatherd, an artist, a landscaper, a weaver, a bookstore owner, a travel writer and an archaeologist, and she will drop everything to go anywhere, on the flimsiest of pretexts. Writing is something she has been doing all her life, though, one way or another, and now she thinks she might actually have something to say.

About the Series: The Averraine Cycle

Enter a world of magic and mayhem through the experiences of everyday heroes. The novels of the Averraine Cycle follow the long shadows of a mythical past as they affect those who are confronted with the remnants of an ancient evil, one that still threatens to overturn centuries of uneasy peace.. The books are connected, but are also "stand-alone" tales that can be read in any order.

Also in Series: The Averraine Cycle

This novel is simply fantastic. The plot is an experience worth reliving again and again. I have a long reading list, but Smith's book makes me want to only continue in her world and characters. The only thing I wanted were more detailed descriptions of characters and setting but that has to do with my personal preference for descriptors not with Smith's writing which is enchanting. Her voice, through her main character Keri, is strong. Her heroine is delightful. The plot, by far, is the best I've read in a long time. Proof that some of the best books out there are going unnoticed.

What a great story. Like two novels in one, I reached what I thought was the climax halfway through, and the story just kept building from there. Very believable characters with a comfortable, almost familiar plot with just the right amount of twists to keep you wondering what's next. A perfect story to sit by the fire with on a winter's evening.

A wonderful read that I couldn't put down. I was also casting the movie in my head as I read it, which is a sign that I want it made into a movie.

Although I'm more of a science fiction/fact kind of reader, I loved this book. I want more!!!

I must admit I have become a little jaded when it comes to fantasy ebooks...but I am glad that I took the plunge with this one. This author writes a rollicking good tale. The action is fast paced and the characters are complex and believable. I truly enjoyed this...reading it from start to finish in one go. "A Spell in the Country" is FIVE star and made it into my top five books read this year and I recommend it to anyone who looks forward to reading a great story!

There is a tendency with many fantasy authors to jump right in to the magic. Morgan Smith avoids this temptation and has a stronger book because of that choice A Spell in the Country takes its time to let the magic unfold. Realistic portrayals of the everyday life of a soldier ground us so that we can form a relationship with Keridwen and appreciate the horrors she will face. Her "ordinariness" is refreshing too. No latent powers being unleashed, just a very human character who sometimes trips over her own tongue, yet manages to navigate through triky situations using her common sense and intuition. I am ready to read many more books in the Averraine Cycle.

I gave up on reading fantasy for years because I was tired of the same old plots being used over and over again. So when I started to read A Spell in the Country, I had fairly low expectations. I was wrong on all accounts. The author has an original and wonderfully complex plot, and she knows her stuff. The book isn't populated by the usual lone knights or warriors off doing their own thing. No, the main character is part of a troop and lives life as part of a military unit. Life in the barracks and swordplay are both well written, giving the reader both fast paced action and time for reflection. And that time for reflection is good, considering the plot twists. Oh, and when someone gets hurt, they heal in real time. That's actually refreshing compared to books in which broken ribs are forgotten after a couple pages because the protagonist needs to be in the action again. Sure it's a fantasy novel, but a little reality goes a long way.

The author has also transcended the Strong Female Character that other authors tend to use to make a point. The protagonist is strong, believable, and it's irrelevant that she's female. She, along with a cast of well-developed characters and an intricate plot kept me engaged and wanting more. I highly recommend the book for anyone who wants a good, original story that maintains a high standard of writing through to the end.

Keridwen's father raised her to know something about fighting and politics. This was a good thing because she really didn't want to marry some minor prince as would have been expected from someone in her position.

A Spell in the Country by Morgan Smith opens with Keridwen sent into battle as a Troop Captain instead of simple soldier. As we'll see, Keridwen's attitude, training, and luck regularly presents her with such beneficial opportunities.

Keridwen's adventure leads her through battles, life at an ancient outpost, palace intrigues in the capital city, and finally to the exciting climatic battle against magical forces of evil at an ancient ruins. Throughout it all, her astute observations of people and her quick thinking in the heat of battle combine to allow her to succeed beyond everyone's expectations.

In between the fight scenes, we see an fantastic vision of the lands of Keraine.

I received a free review copy of this book.

You have subscribed to alerts for Morgan Smith.

You have been added to Morgan Smith's favorite list.

You can also sign-up to receive email notifications whenever Morgan Smith releases a new book.