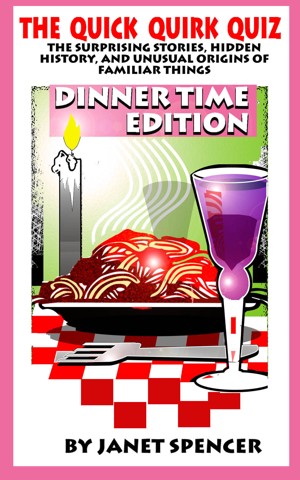 By Janet Spencer - Trivia Queen
You’ll never look at your dinner plate the same way again after reading the amazing origins behind the things we eat for supper. Your freezer is full of fascinating stories of the men, the women, and the miracles behind the invention of the items you stuff into your microwave and your mouth. 28 tales will whet your appetite for more. Can you match the product to the story of its creation?

Janet Spencer was born in 1960 to a poor white sharecropper in Illinois. At 12, she slipped aboard a southbound freighter headed for Australia, where she was further raised by a pack of wild dingoes. Naturally curious and totally obsessed with the minor details of life, she traveled to London to join the Royal Astronomical Society to learn more of the world and the universe. However, the RAS had a long-standing ban against allowing in poor white sharecroppers half raised by wild dingoes, so she instead camped outside and counting the bricks making up the snobby institution. This was a pivotal experience for her. Finding there were exactly 17,431 bricks started her on her lifelong quest for small details, amazing truths, and petty coincidences. The Trivia Queen claimed her crown!
Since then, she has been roaming the world from the Arctic to Tierra del Fuego, counting bricks, observing small insects, and measuring the average number of grains in a typical salt shaker. With such a vast storehouse of trivial knowledge, she now embarks on a new quest: to share this information with her fellow humans - stumping experts, amazing laymen, and bringing wide-eyed blank stares to all those around her. She is the author of several books including "Montana Trivia" and "Yellowstone Trivia" published by www.RiverbendPublishing.com

You have subscribed to alerts for Janet Spencer - Trivia Queen.

Would you like to favorite Janet Spencer - Trivia Queen?

You have been added to Janet Spencer - Trivia Queen's favorite list.