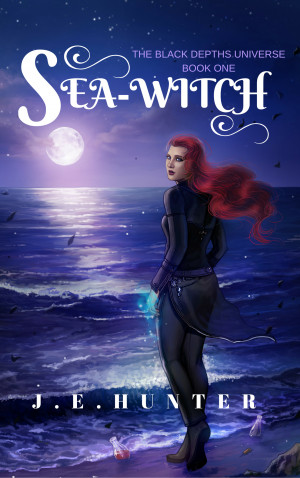 About the Series: Black Depths

When Nessa discovers her sea-witch legacy, the world of Neptunians opens to her. She begins a new life on a private island with magical creatures blessed by the sea, such as pirates, sea nymphs, mermaids and orcies. Adventure and passion come together in a magical world fraught with danger.

Reviews of Sea-Witch by JE Hunter

For my review, I broke this story down into three separate categories: the good, the bad, and the ‘meh’ as a whole. This does not pertain to any sequels, prequels or midquels (if applicable).
Let the games begin!

THE GOOD:
-“All magic comes with a price.” Rumpelstiltskin has definitely said it best, and that is something that I feel most media that involves some form of magic should partake in. “Tales of a Redheaded Sea Witch” is one that falls into this guideline well for me. When Nessa finds out of her Sea Witch origins, she is whisked away from her once mundane and simple life, set to train and improve her powers, which shape from controlling water temperatures to walking along the crisp ocean. Despite the magical element, the way that Nessa trains seems wholesome and believable.
-I’ve come up with something. Most people take interest in the main characters—I took interest in the side characters. Particularly Shia and Amynta. Shia retains some sort of mental naivety from the moment that she was introduced along with her six young mermaid/merman friends. She withheld a sense of sweet sorrow, and became friends with Caesar, a pirate, someone that in olden tales hunted mermaids. That in itself could have been a dynamic relationship. And then there’s Amynta, a Siren. I’ve always found appeal in the history of Sirens, and feel that her character has more potential than simply being Nessa’s third banana in the friendship category. There HAS to be something more to her personality, her origins, as a Siren.

THE BAD:
-There were many spelling and grammatical errors, usually pertaining to the common “you’re versus your” aspect. I also felt that some sentence structure was a bit strange. One example that really stuck out for me was “his eyes were the color of an old silver candlestick that needed to be polished.” That sentence could be written a bit differently.
-I feel that Nessa and Caesar’s relationship seemed forced and quite rushed between their first meeting and when they officially became a couple. I don’t know much about Caesar’s past, but I don’t feel that he, as a pirate, would be so quick to succumb to one person. And I feel that after losing her chance with Aaron, the boy from her old life, she fell into lust with Caesar rather than love. The pacing of their relationship felt so unrealistic, even in a magically inclined universe.
-Nessa retains an incredibly childish nature throughout the story pertaining to her heritage, her negligence of her behavior towards authority, her thick-headed and impulsiveness towards others’ actions after considering her own, and her sudden call to action at the end of the story was a bit… I suppose surprising could be the right word. I’m just not certain how developed I felt that Nessa was in more than just her elemental virtuosity—her character itself lacked some depth for book one. Her behavior also leads to a lot of friction between her and other characters such as Colleen, who doesn’t like Caesar due to incidents in the past, or getting jealous of Shia and Caesar’s friendship.

THE MEH:
-I felt some relation to Nessa at the very beginning of the story, having lost my mother suddenly at the age of eighteen. But I sometimes don’t buy into how she allows the rest of the world to unravel and wants it to fall along with him. At the same time, we all have methods of coping after loss.

THINGS I NEED TO KNOW/FINAL THOUGHTS:
-I’d love to try and comprehend more about Caesar’s past.
-Shannon’s past. I feel like she has a deeper reasoning for why she behaves as seriously as she does, and why she doesn’t have a close relationship with her daughter anymore.

OVERALL:
I’d rate the first book a 2.8 out of 5 stars overall, rounding it up to 3! Sadly, the first book felt about average for a read to me, and the concerns that I had seemed to overwhelm any sorts of positives that I had.

Would I read the sequel?
Sure, I’d give it a shot just to see if any of my thoughts and concerns are addressed.

Anyone that knows me, knows I love anything to do with our oceans, seas, lakes…water of any kind…and mermaids, so when I saw Tales of a Redheaded Sea-Witch, I had to have it. The cover had me hooked and the more I read, the more I became involved with Nessa’s life.

The fantasy elements were woven into the human elements so well, I was able to get lost in the pages and become a part of Nessa’s world. The surrounding characters all played an important part and she will learn what it’s like to work as a unit, a team, where sacrifice will be done in the name of love. She matures and develops at a believable pace.

Supernatural and paranormal creatures are high on my reading list and Tales of a Redheaded Sea-Witch by J E Hunter did not let me down. I have read numerous mermaid stories, but not many about a sea witch and some of the other magical creatures J E brought to life. I am eager to keep on reading about their world and I think you will be too.

I received a copy of Tales of a Redheaded Sea-Witch from J E Hunter in return for an honest review.

You have subscribed to Smashwords Alerts new release notifications for JE Hunter.

You have been added to JE Hunter's favorite list.

You can also sign-up to receive email notifications whenever JE Hunter releases a new book.