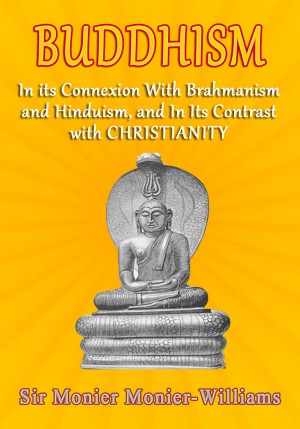 Buddhism: In Its Connexion with Brāhmanism, and Hindūism, and In Its Contrast with Christianity

I have striven also to show that a true Hindū of the orthodox school is able quite conscientiously to accept all these developments of religious belief. He holds that they have their authoritative exponents in the successive bibles of the Hindū religion, namely, (1) the four Vedas—Ṛig-veda, Yajur-veda, Sāma-veda, Atharva-veda—and the Brāhmaṇas; (2) the Upanishads; (3) the Law-books—especially that of Manu; (4) the Bhakti-ṡāstras, including the Rāmāyaṇa, the Mahā-bhārata, the Purāṇas—especially the Bhāgavata-purāṇa—and the Bhagavad-gītā; (5) the Tantras.

The chief works under these five heads represent the principal periods of religious development through which the Hindū mind has passed.

Thus, in the first place, the hymns of the Vedas and the ritualism of the Brāhmaṇas represent physiolatry or the worship of the personified forces of nature—a form of religion which ultimately became saturated with sacrificial ideas and with ceremonialism and asceticism. Secondly, the Upanishads represent the pantheistic conceptions which terminated in philosophical Brāhmanism. Thirdly, the Law-books represent caste-rules and domestic usages. Fourthly, the Rāmāyaṇa, Mahā-bhārata, and Purāṇas represent the principle of personal devotion to the personal gods, Ṡiva, Vishṇu, and their manifestations; and fifthly, the Tantras represent the perversion of the principle of love to polluting and degrading practices disguised under the name of religious rites. Of these five phases of the Hindū religion probably the first three only prevailed when Buddhism arose; but I shall try to make clear hereafter that Buddhism, as it developed, accommodated itself to the fourth and even ultimately to the fifth phase, admitting the Hindū gods into its own creed, while Hindūism also received ideas from Buddhism.

You have subscribed to alerts for Sir Monier Monier-Williams.

You have been added to Sir Monier Monier-Williams's favorite list.

You can also sign-up to receive email notifications whenever Sir Monier Monier-Williams releases a new book.