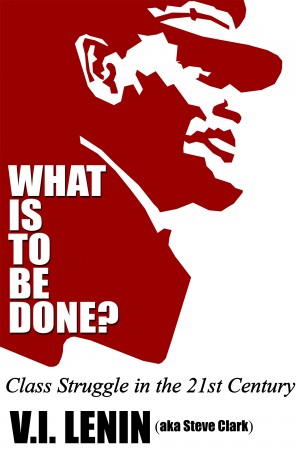 What Is To Be Done? Class Struggle in the 21st Century

By Steve Clark
With the future of civilization and the earth gravely threatened by social polarization and ecological destruction, every forward-thinking person worldwide is asking, what is to be done? Reinvigorating Lenin’s pen name and updating Marxism for class struggle in the 21st century, this book unveils the global strategy for revolution in today’s world. More
After roughly 500 years on earth, industrialism has reached the limits of its sustainability. Ecological destruction in combination with economic and social polarization has brought civilization to the brink of a new dark age. Deforestation, species extinction, oil depletion, climate change, food insecurity, epidemics, migrations and soaring violence – these now are the markers of our planet’s future.

Already bearing down in the harshest possible way on millions of the world’s people, this looming catastrophe – this truly existential crisis – is broadly dispiriting to progressive and reactionary forces alike. None offer a fresh, practical, revolutionary way out.

Instead, while the world’s oil giants aggressively promote a “war on terrorism” that only exacerbates the crisis, the big banks, under cover of austerity, retreat from real investment that might re-stabilize community life through global full-employment. Driven all the more by fierce competition in today’s catastrophic times, all corporations necessarily put their own profits ahead of human need, social service and ecological accountability.

Meanwhile, despairing Boomer progressives, watching corporations take evermore thorough control of governments all over the world, imagine only a dystopian future in which good people survive in local, self-made, self-reliant communities. But, younger activists, still with energy and long lives ahead and bearing witness to the crisis at hand, cannot abide such gloom. Mobilizing through social media, they rise periodically in spontaneous rebellions against the corporate empire, momentarily occupying its squares but unable to secure lasting and decisive victory. Their vitality begs better vision and leadership from their elders.

Revitalizing V. I. Lenin’s pen name, What Is To Be Done? cuts against all hopeless and debilitating responses with a penetrating update and application of Marxist class analysis. Embracing Marx’ philosophical materialism – “[Humankind] always sets itself only such tasks as it can solve” – American leftist Steve Clark asserts that, like other historic world systems (hunting/gathering, agriculture) that reached their sustainability limits, industrialism has already created the forces of its own succession.

Those forces are the service class, the people who provide the services that make contemporary life possible: teachers, doctors, nurses, accountants, lawyers, counselors, entertainers, artists, designers, planners, economists, journalists, systems operators, food servers, clerks…the list goes on. These are not the proletarians of Marx and Lenin’s time. These are the productive forces of a new age, the Service Age.

Service production is inherently oriented to solve problems. It has no intrinsic drive to exploit labor or nature. One server serves another who, in turn, serves others. All are dependent on others for the services they need to survive. It is a new way of life with the potential to put everyone on earth to work solving the social and ecological problems of their own community.

Clark asserts that the Service Age is already here, but its power and potential is masked by the continuing cultural oppression and political domination of corporate capital. Denying the possibility and rejecting the goal of overthrowing modern-day states and nationalizing corporate assets – that is, redefining the objective of revolutionary class struggle for the emergent Service Age – Clark explains how the structure, positioning and linkages of service production open a different revolutionary alternative, one that Marx and Lenin could not foresee but would certainly welcome.

At 75 pages, What Is To Be Done? is a compact revolutionary manifesto for 21st century class struggle. Every Marxist, nay, every person concerned about civilization’s future on earth can gain perspective and guidance from its exposition.

V.I. Lenin is the pen name of Steve Clark. Like Boomers worldwide, I came of age in the turbulent Sixties. I was compelled by the hypocrisy of mainstream American politics and culture to join the struggles against the war in Viet Nam and for civil rights and women’s liberation.

In 1973, after a stint at the Air Force Academy, graduation from Georgetown University (economics) and a go at law school, I "dropped out" to launch a non-profit, community-based, worker-managed, grocery cooperative (Stone Soup) in Washington, DC. After President Nixon labeled me and other anti-war protestors "communists," I studied Marxism and, eventually, took an active part uniting leftwing activists nationwide into the Communist Workers Party that survived into the 1980s. Through the Party and various other organizations, I worked for most of two decades as a community organizer. In the 1990s, I earned a master’s degree in education (George Washington University) and taught high school. In the last phase of my career, I was a communications professional and health writer on the union side of the construction industry.

Though our party-building experience had exposed fallacies in socialist theory and practice, everything else in life confirmed my early conclusion that revolutionary struggle is necessary to hold corporate capitalism to social and ecological account and build a better world. To this end, I maintained a constant interest in learning and summarizing what was wrong in Marxism by discovering the true realities of contemporary, real-world social change.

In this I found that my appreciation for the inevitability of global revolution was confirmed by many insights of modern social science – particularly the work of the Alvin and Heidi Toffler (The Third Wave), anthropologists Marvin Harris (Cannibals and Kings) and Helen Fisher (Anatomy of Love), partners Neil Howe and William Strauss (The Fourth Turning) and socioecologist Sing Chew (Recurring Dark Ages).

Beyond theory, intensifying hardship and struggle worldwide compelled continued allegiance to revolutionary aspirations. After 9/11 and the global financial crisis of 2008, it was clear to me that the world’s people and its corporate elite are now at a decisive crossroads.

Wishing not just to understand but, more, to help change our world, I launched GlobalTalk, a blog for global revolutionaries, in 2004. In 2011, I published Digging Out: Global Crisis and the Search for a New Social Contract (with my brother Charles) and opened LocalGlobalNexus.net to promote the book and its assessment. In May 2015, adopting the pen name V.I. Lenin, I updated and refocused Marxist theory for 21st century class struggle in What Is To Be Done?

Sooner, now, than later, as our consciousness and interconnections increasingly demand, the people of earth will rise up in coordinated social revolution and compel an accountable, new social contract from the corporate elite, one that puts the interests of the whole ahead of the parts. Can you imagine our world in another 50 years if we don't?

Review
Henry Loeb reviewed on Aug. 22, 2015
(no rating)
What is to be Done? by Steve Clark is the pressing question facing the world's peoples in the face of the planetary ecological and socio-economic crisis. Using Lenin and Marx as guides but not dogma, What is to be Done? refreshes and updates the class analysis so necessary to focus the struggle to effectively change the world. The corporate and finance stranglehold on the economy must be broken. A new social contract to re-balance the class interests must be forced on this monopoly system to prevent catastrophic climate change and a political dark age. The spectre of fascism looms. We need to unite the world and become a Global Problem-Solving Authority through our social networks and lead the revolution forward to the new Service Age of corporate accountability, full employment, peace, justice, social service, and a sustainable future. This line is laid out in the book as a lifeline to save the planet and the people from the status quo stranglehold preventing moving forward with this urgent task. Good start to the solutions we must all come up with for ourselves and our future generations.

You have subscribed to alerts for Steve Clark.

You have been added to Steve Clark's favorite list.

You can also sign-up to receive email notifications whenever Steve Clark releases a new book.