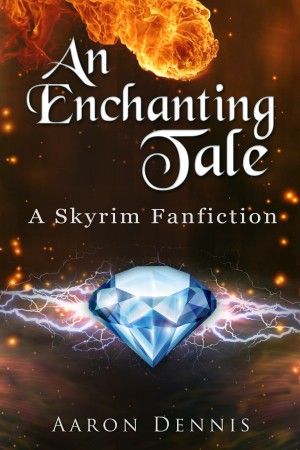 By Aaron Dennis
Rated 5.00/5 based on 2 reviews
A young dark elf mage is fed up with the limitations of the arcane art of enchanting and sets off on a quest to learn hidden truths. The Daedric Prince, Hermaeus Mora, is attracted when the dunmer runs errands for Farengar Secret-Fire and sets the young mage off on a quest of his very own. More
This is a fanfiction based on The Elder Scrolls series of video games and incorporates the worlds from Morrowind, Oblivion, and Skyrim. An Enchanting Tale is free, thus eliminating any copyright infringement. This novel is not intended for profit.

S'maash is a young dark elf bent on making new discoveries in the field of enchanting. After discouraging words form his fellow mages, S'maash and his brother, S'maath, venture into the dwemer ruin of Dmalzthur in an effort to discern just how the deep elves crafted items such as Volendrung, Keening, and Sunder, yet they find only death and ash in the ancient ruin. S'maash then travels into Cyrodiil, hoping to find some clues on the ayleids' enchanting practices. When things go awry in the ruin of Anutwyll, S'maash makes his final move into Skyrim, joins the College of Winterhold, and finds himself on a quest for the Daedric Prince of Knowledge, Hermaeus Mora.

Loved it. True to the game!

I was going to pass on this one originally. An enchanting Tale is a Skyrim fan fiction. I have played Skyrim, and I liked it very much, so I thought this was probably just going to ruin the world of Skyrim. Boy was I wrong.

I don't know how Dennis does it. Not only are his original characters in this story absolutely amazing, but he somehow managed to stay true to the characters from the game.

An enchanting Tale starts of in Morrowind. S'Maash is a Dark elf who likes enchanting, and he wants to learn more of the art, and after he runs into a wall in Morrowind, in the town of l'Thu Oad or something, it isn't an actual from the game, but it sure seems like it, he goes into a dwarven ruin, which again I think is a made up one, but then he goes to Cyrodil, and after exploring an ayleid ruin, and I think it's a real one from the game, and there he gets beat up.
My favorite line at that point is "this is the part where you fall down and bleed to death." It was like playing Oblivion.
So then S'maash goes to Skyrim to try to get into the college of Winterhold.
I don't even want to say anything more than that because the story is just so awesome. If you played The Elder Scrolls games, you need to read this story.
It was well written like a real novel not like most fan fiction. It was true to Skyrim, and it was totally original. If you;re expecting to see the Dragonborn though, he's not in it, which is probably best. There is a Dragon though.
Really a great story, and just because of this book, Dennis is my new favorite author.