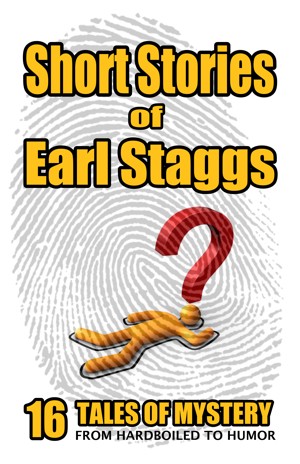 By Earl Staggs
Rated 4.00/5 based on 1 review
A collection of published stories by Derringer Award winning author Earl Staggs. A mixture of Mystery, Crime and Humorous stories to satisfy readers who like variety. More
This collection includes what I consider the best of my stories written and published during my writing career. I enjoy writing stories in a variety of styles. That’s why, in this book, you may read a hardboiled crime story, then go right into a light and humorous whodunnit, and from there, into a softboiled private eye yarn. I like this kind of variety when I read, and I hope you do, too. At the beginning of each story, I’ve added the history of it, a little of the “story behind the story,” so to speak.
You won’t find offensive language, gory violence of explicit sex here. I hope you’ll find, however, a few hours of entertainment in a mixture of settings, situations and characters
Available ebook formats: epub mobi pdf rtf lrf pdb txt html
First 8% Sample: epub mobi (Kindle) lrf more Online Reader
pdb
Price: $1.99 USD
Buy Add to Library Give as a Gift
How gifting works
Create Widget
Tags: humorous cozy whodunnit short mystery hardboiled mystery softboiled earl staggs
About Earl Staggs

Earl Staggs earned all Five Star reviews for his novels MEMORY OF A MURDER and JUSTIFIED ACTION and is a three-time winner of the Derringer Award for Best Short Story of the Year. He served as Managing Editor of Futures Mystery Magazine, as President of the Short Mystery Fiction Society, and is a frequent speaker at conferences and seminars.

He invites any comments via email at earlstaggs@sbcglobal.net
He also invites you to visit his blog site at http://earlwstaggs.wordpress.com

In the interests of full disclosure, let me explain at the outset that Earl Staggs and I have been friends for a number of years, going back to when I joined the staff of the then-named *Futures Mysterious Anthology Magazine* as an editorial reviewer and Earl was Managing Editor. No more than a year later, maybe less, some changes occurred with the staff, and Earl asked if I'd like to be one of three fiction editors. I accepted the position and, when a year or two after that Earl stepped down as M.E. to serve as Editorial Consultant for the renamed *Futures Mystery Anthology Magazine*, he offered me his former position and I accepted.

Prior to the publication of *Short Stories of Earl Staggs*, I had read some of Earl's short fiction as well as his excellent--and recommended--novel, *Memory of a Murder*. I correctly assumed, therefore, that reading this collection of fifteen stories, each of which is prefaced by an author's note about its origins, would be a satisfying experience.

The book opens with the Derringer Award-winning "All the Fine Actors," in which a hitman assassinates a local sheriff. Both he and his employer are aware that people too often aren't what they seem, and both know the collection of his fee won't be an easy task.

"A Rainy Day Robbery" is a lighter-weight tale about the fictional Watango County, Texas Sheriff Mollie Goodall who, while trying to track down a thief, has to contend with a broken fingernail, every mention of which made me wince.

A tough former Baltimore cop, now living and working as a bail bondsman and sometime bounty hunter, returns to his hometown to pursue an escaped criminal and confront some people and issues from his past in "Baltimore Bounty."

"Battered" concerns Detective Sam Hollis's rabid determination to nail a longtime abuser who has finally killed his victim. Hollis has his own demons to deal with while trying to salvage his marriage.

After his sister's funeral, a visiting small-town cop arranges a meeting with her estranged husband, a wastrel pretty boy, in "Brother-in-Law." Ostensibly to discuss which of them as the woman's survivors gets what, the meeting has a much darker purpose.

The weakest story in the collection for me was "Caught On Christmas Eve," the tale of a twelve-year-old wannabe thief and the man who witnesses what he's up to at a department store's jewelry counter. Originally written for a Christmas anthology, it's predictable and sentimental--but redeemed by not being too soppy.

A contract killer who prides himself for being meticulous and thorough gets the shock of his life when a woman he killed walks into the restaurant in which he regularly dines. Before the evening is over, he's in for dyspepsia-inducing surprises in "Dead Woman Walking."

"Fig Newtons and Heavy Bags" is the lightweight tale of two spinster sisters who aren't quite what they seem.

Another Mollie Goodall story, "Robbery On Christmas Eve," concerns the theft of church funds from a locked office. How the thief got in and out, as well as who the thief is, are the puzzles Mollie must solve.

In "Room Six," a small-town sheriff sets a simple trap to determine which of three wealthy, spoiled brothers murdered a nineteen-year-old woman.

"Silky's Getaway" is a brief comic tale about a professional burglar's encounter with a most unlikely obstacle.

Not without moral qualms, a cop exceeds standard procedural boundaries to dispense the justice the courts failed to in "Taking Richie Gold Down."

On her daughter's wedding day, Amanda Barnes is kidnapped by a man who has held a grudge against her for twenty years, a man who stirs up memories of her harrowing past in the tense and exciting "That Night in Galveston."

"The Chopsticks Clue" resulted, as the author explains in his prefatory note, from an editorial challenge. Homicide Lieutenant Sue Townes encounters her former partner Millie Walker, now a meter maid, while investigating a stabbing death at a Chinese restaurant. More interesting than the crime itself is the animosity Sue has toward Millie because of an incident in their past.

Sheriff Mollie Goodall makes another appearance in the comical "The Naked Man On the Roof" when she has to talk the titular character down from the roof of a deserted icehouse (the fall from which wouldn't kill him), learn why he's despondent, and then solve a crime.

Chief of Police Harry Winfield learns from a pair of Dallas cops, to his surprise and disheartenment, that Pam Wilson is wanted for the murder of a prominent attorney in "The Waitress." She swears she didn't kill him but knows who does--but won't reveal the murderer's name lest she be forced to reveal things about herself she can't afford to reveal. Harry must determine where the truth lies.

*Short Stories of Earl Staggs* is a nicely varied collection of light and dark, humorous and serious, soft-boiled and hardboiled crime stories. The author writes in a smooth, accessible prose style, deftly delineates characters, and has an excellent sense of pace. To my friend and former colleague, the venerable Earl of Staggs, I say, "Well done, *amigo*. Give us more." To you who are reading this review, I say, "If you enjoy good short crime and mystery fiction, get yourself a copy of this collection, which is available in electronic and paperback formats, because the Earl Staggs byline always guarantees a pleasurable reading experience."

You have subscribed to alerts for Earl Staggs.

You have been added to Earl Staggs's favorite list.

You can also sign-up to receive email notifications whenever Earl Staggs releases a new book.