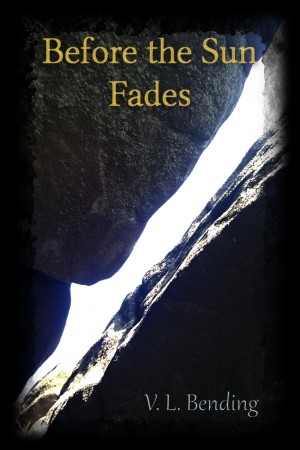 Before the Sun Fades

By Dr. V. L. Bending
Rated 5.00/5 based on 1 review
When a lone traveller with a shadowed past enters a magically concealed valley and finds herself trapped there, she must gain the aid of the inhabitants and battle for its salvation before the magical light she carries is exhausted — but the true origin of the curse upon the valley is not as black and white as anyone expects. More
Rakariel has faced the darkness and lived to tell the tale. Her long journey is an attempt to escape the shadows of her past, but when she stumbles across a valley concealed by ancient and powerful magic in ages past, she feels she has no choice but to enter and confront whatever may lie within. Finding herself trapped inside with no way back, she forges onwards, her courage sustained by the magical light she carries — a light that will be all too quick to fade if she cannot find sunlight again. But the same light that sustains her is a beacon to the twisted creatures that stalk the perpetual gloom…

In the ruins of the once proud city at the valley’s heart, the last survivors of its people remain, living in darkness and silence to escape their deadly hunters. Awed by this impossible stranger who bears the light of the legendary sun upon her brow, one such survivor becomes her guide, offering her aid and companionship as she seeks out the source of the curse upon the land… for, despite all that stands in her way, she must lift it before her light fails her, or die trying.
Available ebook formats: epub mobi pdf rtf lrf pdb txt html
First 20% Sample: epub mobi (Kindle) lrf more Online Reader
pdb
Price: $3.25 USD
Buy Add to Library Give as a Gift
How gifting works
Create Widget
Tags: adventure fantasy magic
About Dr. V. L. Bending

I had an unconventional upbringing that taught me three things above all: to ask questions about everything, to think critically about the answers I get, and to be confident (but hopefully not overly so) in myself. If space is the final frontier, understanding is the final frontier of the mind, and it&#39;s that that I live to explore.

Besides writing books, I&#39;m a tutor and spend my spare time fixing my bomb site of a garden (an activity I find more enjoyable than one might expect), and enjoy reading, gaming, climbing, caving, and generally adventuring. I love animals, and have had or helped look after an endless string of pets: mice, gerbils, hamsters, rats, lizards, snakes, rabbits, cats, and dogs. Since I can&#39;t keep pets in my current house, I tend the garden, feed the wild birds, and grow houseplants, including a coleus that really should have died last year...

Reviews of Before the Sun Fades by Dr. V. L. Bending

“Before the Sun Fades” is the debut novel of up-and-coming fantasy novelist Vicky Bending. It tells the tale of Rakariel, a travelling mercenary and explorer, who encounters a magically sealed valley. Once inside, she meets its inhabitants, who, terrified by monsters, live a shadowy existence beneath the mists; which all but block the sun from entering the valley. Rakariel takes up a quest: to rid the valley of the curse engulfing it and the monsters within it, part to satisfy her own desire to escape the valley, and part to “free” its inhabitants from their existence…but it’s not quite so simple: she only has 9 days before her light runs out!

The novel deals with some quite complex real-life issues – including the concept of the “right thing to do”, in a very subtle way – no giant moral hammers here(!) – and does lead the reader to make their own conclusions about morality whilst reading. The main character, Rakariel, is very complex, and clearly well known and understood by the author, who tells us more and more about her character as the book progresses. I have to say that by the middle of the volume, I had developed quite an emotional attachment to her – something I rarely do in a novel – and did get quite worried about some of the perilous situations she found herself in during the latter stages of the story. Of the other characters, less can be said: they are all clearly in support of Rakariel (no major anti-heroes or other characters here), but they do each have distinct personalities and are clearly well crafted. One point of curiosity is that there are no named “baddies” in this story, a fact which works very well and sets this story apart from many others.

Aside from characterisation, the location for the story is also well constructed – it is very easy to put yourself in the shoes of one of the scared inhabitants of the hidden valley, blocked from the sun for so long that they only know it in myth. The author gives just enough details to develop an image in the reader’s head, but at the same time maintains a fast paced and action packed storyline.

This beautifully crafted story did leave me asking for more: I hope that the author might consider a follow-up, telling the stories of some of the more minor characters – and also answering the questions “what happens next?” We have got to know Rakariel so well, it’s hard to think that this will be her last adventure!

I think that this story will appeal to both devotees of the fantasy genre and newcomers alike – and I would strongly recommend it a good read for a long train journey for anyone!

You have subscribed to alerts for Dr. V. L. Bending.

Would you like to favorite Dr. V. L. Bending?

You have been added to Dr. V. L. Bending's favorite list.