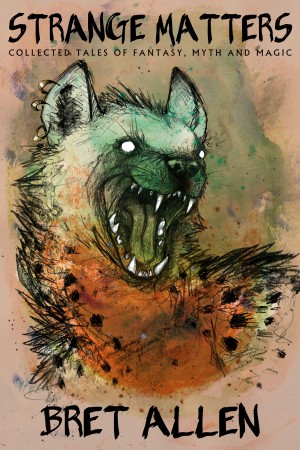 All contain matters best described as ‘strange’, because to me, strange matters.

This book includes twenty pieces of poetry and fiction (some with mature themes), including:

Wordsmith
Kate’s night is interrupted by meeting a mute, half-naked Ethiopian boy, which would be fine if he wasn’t being hunted through the streets of London by hyenas.

Torc
When a group of bikers get lost in a forest, they find that they are not alone.

The Firebird
Ekaterina wants to be taken seriously by the men of her village, so she sets out to hunt the greatest prey of all… the legendary Firebird.

Arcturus
A nameless criminal explores his capacity for magic- and empathy- when he’s forced to make unusual acquaintances to escape justice.

It Wants To Eat Me
The diary entries of a teenage girl who finds an unusual and unwelcome intruder in her dreams.

British Gods
Two strange figures watch the violence of the London riots unfold and do what they can to help, as only forgotten gods can.

Nine
Having just died, Andy’s not pleased to find himself in the ancient Egyptian afterlife, where the goddess Bastet wants a word with him.

What is there to say? I'm Bret Allen and I'm a writer!

I have a blog site at www.bretallen.info where I keep my creative writing, copy writing and musings. I'm a journalism graduate and enjoy writing articles and copy as a freelancer, especially when humour can be used, but my forte is creative writing.

My favourite genres are fantasy, scifi and supernatural. There's something fascinating about the comparisons drawn between real life and the fantastic; in a contrary fashion, they can be more profound than those drawn by real-life stories.

Most of all, I try to put a new spin on those genres, which in many cases have become stiff, old shambling corpses. Stitch on a smart new head, put a little truth in the heart, run a 500 megawatt current of strangeness through them and suddenly... they live again!

I've lived most of my life in Shropshire and Staffordshire. I have a few great friends, a myriad of mates, a large and wonderful family, a fur baby and a long suffering partner.

I draw most of my inspiration from Neil Gaiman, Tolkien, Tad Williams, Kim Newman, Terry Pratchett, daydreams, nightmares and the magic of the everyday.

At first glance, it would seem that Strange Matters is an eclectic gathering of various ideas and stories. There's forgotten Gods, there's Hyenas wandering around the city streets like they own the place, there's Rats at war (yep... it works though, I don't know how but it does), there's a city made entirely out of boats, and there's this... this whole thing about dreams and death and the bits in between which Bret revisits in several of his pieces. There's even a Bardic tale in there; a full story written in prose that spins on like a strange folktale from another land. Each story in it's own right is cleverly written and often there are neat twists or warped perspectives of the norm. But more so than that, when you consider the whole collection together, there is a unifying, solid theme that ties every single story together; Change. Bret's stories always seem to be pulling at the standard; the status quo; the stagnant; and constantly striving, struggling towards change. Every story is about the need for taking a new step, and those that can struggle free and dare to be different, will emerge victorious in the end. One story will demonstrate the need for old traditions to be scrutinized and altered; another story will see the protagonist forced to confront the flaws of their character and change the way they are. Other stories are softer in approach, choosing to show the changing of knowledge and wisdom from one generation to another. It's truly fantastic that such a bizarre collection of seemingly radically different short stories can be so expertly brought together with a strong underlying current. There are some star pieces in here which are guaranteed to do the one thing all stories should; they will spark your imagination. They will make you want more. You are drawn in with each new story and when you finish, you'll want to stop before moving onto the next just to thing about it for a bit. I wasn't ready to leave Seacross after I finished. I wasn't prepared to just forget about the poor souls trapped underground with something incomprehensibly terrible. I wanted to hold the old Gods and their bickering, witty rapartee in my mind for a while longer. These are fantastic, well crafted stories, and they will stay with you a long time after you've finished. Strange Matters, and I'd have to agree.

This is a fantastic collection of short stories and poetry, a must read for fantasy fans. There is a really interesting mix of themes, from cats in the Egyptian afterlife to a gang of hyenas in London! All very well written, with a unique new take on different myths and magic.
Thoroughly enjoyed this collection, couldn't put it down!

You have subscribed to alerts for Bret Allen.

You have been added to Bret Allen's favorite list.

You can also sign-up to receive email notifications whenever Bret Allen releases a new book.