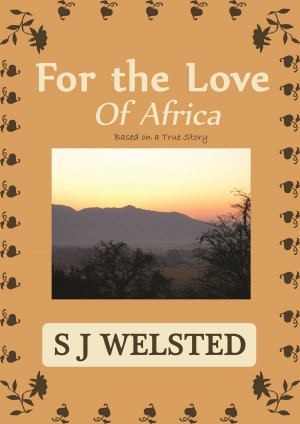 For the Love of Africa

Debbie is persuaded to tell of her adventures in Swaziland, Africa one night over dinner by her boyfriend and her two closest friends. She tells them of the game captures, safaris, conferences and life that she had, including the romance that developed between her and her employer, Luke. As she speaks, she relives each moment as if it was only yesterday. More
Phil has now known Debbie for nearly a year and each time he tries to get her to talk about her experiences in Africa, she goes quiet. With the help of her best friends, he manages to get her to talk about all that happens over dinner one night. She's happy to tell of her adventures until her friend Jane adds that she also wants to know whatever happened with her and Luke. Debbie is unsure if she wants to divulge all, being that she is telling the story in front of Phil, her boyfriend. After some encouragement from Phil, she begins her tale of what turns out to be quite a steamy romance.

Debbie starts the story with her and her travelling buddy Amy, choosing to go and stay at Mlilwane Reserve in Swaziland as their last stop before heading back to the UK. Debbie is fascinated by hippos and the reserve advertises on line that they have a feeding session where people can see these animals up close. In their first day there they meet a man by the name of Luke and this is when it all starts. Luke takes them on many safaris around the three main parks in Swaziland and before their short stay there is over Debbie is offered a job by Luke. She is unsure whether to take it, but after Amy points out the lack of prospects Debbie has back home and that Luke is incredibly handsome, she takes him up on the offer and becomes his PA.

In her story Debbie picks out the events that show how her relationship with Luke started as well as those that are simply interesting. She speaks of the animals, such as an enormous crocodile, that they rescue from neighbouring lands, the nature and animals that they see when out on safaris. She talks about the VIP guests that she has to entertain in hopes to get them to part with money or swap animals with for their rare breeding program and the conferences she has to attend. As she speaks, she relives each moment as if it was only yesterday, instead of the six years that it has been.

As she continues the story you begin to find out that Luke is quite a controlling character and Debbie spends near enough the entire day and much of the night with him. During the day he treats her like an employee and then in the evenings or when there are no prying eyes, more of a girlfriend. Much of the time it is just kissing or cuddling, but there are some more steamy moments. She has her own contained room in his house and even when their relationship becomes more physical she refuses to sleep in his bed until he is prepared to show and tell people that they are an item. This is when she finds out that Luke has recently broken off an engagement, which he has failed to mention and when she does he reacts as if she is overreacting. As time goes by Debbie becomes sceptical to whether this engagement is truly over. Despite this feeling, she continues on hoping that she is wrong and decides that if she is going to live out in Swaziland she needed to put down some roots. Unfortunately this seems to make Luke even more jealous and controlling. The tipping point for Debbie is when a friend of hers comes to visit. Luke puts up so many obstacles for her seeing them that she almost loses her temper with him. That is until she realises that he has mistaken the name Marty as being a boy’s name. When she explains that Marty is short for Martina, he quickly changes his tune and is happy for Debbie to spend as much time with her as she likes.

By the time her parents come out to see her, some five months later, she has realised three things. One is that she is suspects her job is only a distraction, two is that as much as she loves being out there it possibly will never be her home and three, her relationship with Luke was fuelled by lust and not love. Before she makes a rash decision though she confronts Luke and it is then that she learns the truth.

SJ was born in Nairobi, Kenya in 1982. From there she travelled with her parents to many places around the globe. Books and writing have always been her way of relaxing. All her life she has had vivid dreams. Then one day she decided that perhaps the reason she dreamt so much was because they needed to be written. And so, in between working with her animals and looking after her small household, she wrote down the dreams until slowly each became a story in their own right.

About the Series: Adventures of Debbie McHewin

Debbie is just a normal girl and yet her life has often been described as a soap opera. Her choices are often based on emotion, which is probably why they don't always go so well. She jumps into relationships feet first and then has to muddle through. Underneath it all though she is just a girl, looking for her Mr. Right.

You have subscribed to alerts for SJ Welsted.

You have been added to SJ Welsted's favorite list.

You can also sign-up to receive email notifications whenever SJ Welsted releases a new book.