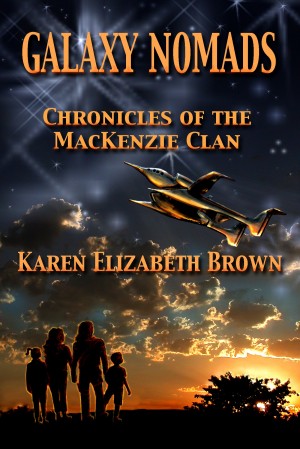 Born in Southern California, I migrated to Southern Oregon in 1974 and have enjoyed living among the trees and mountains since then.
My passion for writing was on hold until a few years ago, when my daughter bought me a computer. It was after this that I transferred my stories down from the scratchings on paper to a sensible form.

Reviews of Galaxy Nomads: Chronicles of the MacKenzie Clan by Karen Elizabeth Brown

For me, the adventure began right in the title: nomads, out in space, the chronicles of a clan. And Clans can be feisty, sticking up for each other no matter what. So... I expected some action, and I was NOT disappointed.

Overall, it's a space adventure from one end of the galaxy to the other. Only, the story spans generations! It's an epic length read, at a little over 95,000 words.Their origins, worlds and a little family history. Why they started traveling the galaxy with #1 Rat-of-a-Bad-Guy on their heels. Naturally they encounter aliens along the way, both friendlies and hostile. Deceit, betrayal, loyalties, loves, plagues and pirates! All the good stuff that goes into a space opera.

This generational story is divided into 4 "books" within this one book. Book I, Supernova, starts out with a bang which sets the stage for the need to escape into space, pronto. And from there, the power struggles and adventures continue.

It seems conflict and stress bring out ones true nature, and sure enough, the nature of the two main Rat-of-a-Bad-Guys emerges, along with the virtues of our heroes. In my view, the worst Rat-of-a-Bad-Guy was the first one, and he was a doozy. Come to think of it, #2 was not too likeable either, and I did NOT want to read about his past; nope, no excuses... I was perfectly fine detesting him! They say every good story needs a good bad guy, and these 2 filled that job just fine.

Anyway, off into the galaxy they plunge, and it was fun to read about the worlds they come across. They were imaginative places and not the same-ole same-ole. My favorite was the planet Patchouli, full of short blue-skinned people. The author did a good job painting word pictures. I would have enjoyed exploring these worlds even longer.

I enjoyed all of the main characters, but my favorite side character was a mystic named Hestia, who seemed have a very long lifespan. I would have loved to get to know her better.

If I could change one thing about the book: divide it into 4 separate books, and expand on the characters, places and experiences. So many were interesting, colorful and/or quirky characters and had such potential for development, it made you want to know them better. Hint to author: sequels or prequels, diving into these characters lives, following their branch of the family tree further out? hint hint

Back to the story. It's told chronologically straight, from the first refugees to escape into space, and then following subsequent generations who are born IN space. I'm not a techie, but to me the medical and science part of this chronicle was believable and smoothly fit right into the story. Not overkill like some stories, where I go cross eyed with excess technology, but written with enough detail and authority that it carried the story and added to it in a credible way.

Same with the aliens encountered. Though they weren't too developed, there was enough so that they flowed with the storyline, and some even gave me a chuckle. Speaking of chuckles, the authors sense of humor is on the dry, subtle side; no silly slap stick stuff. More wry to sarcastic and/or tongue in cheek and between the lines humor. I really appreciated that.

I enjoyed the casual bantering/bickering dialogue between some of the characters. Especially the second generation "couple", Ryder and Carredyn, who fight like cats and dogs. I KNOW people like that, and it cracked me up.

But overall I would say the theme that kept popping up was one of strength and courage from unconditional love and from loyalty; of hope and perseverance against the powerful and corrupt. The author never gets preachy or stuck in never ending philosophical navel watching; instead there are subtle yet interesting points of view that weave in and out seamlessly within the storyline, yet made me take notice and think about them. An added layer of depth, if one takes notice of it. They are short and easy to overlook, but rich little morsels.

There were a couple of plot twists I didn't see coming, which made for fun surprises. One was a shocker that had me saying out loud "no way!" But without a doubt my favorite "action" scene was the final showdown in Book IV, Merridian between our hero and the #2 Rat-of-a-Bad-Guy. Because the battle was INternal, not external. It was told in a way that convinced me the author had personal experience facing down her own powerful internal demons, and I could feel the "realness" of it. It was familiar, because I have felt that same struggle. How we have to face our enemy, not run; to believe in ourself; to accept help; to stand firm and discover we have more power at our disposal than we had realized. In the story it was much more colorful, explosive and dramatic than I could tell it here, fitting into the action of the plot naturally, and not like some pedantic life lesson (which is how I'm afraid I made it sound here). In short, it was an exciting battle, and had me rooting for our hero.

Bottomline, YES I would recommend this epic story to anyone who enjoys character driven action adventure stories. It's colorful, creative and full of interesting people, with enough mysteries and hints to make me hope for a second book, making the Chronicles of the MacKenzie Clan into a series. On that basis, of wanting to read more and hoping for the another installment, I give it 5 stars.

You have subscribed to alerts for Karen Elizabeth Brown.

You have been added to Karen Elizabeth Brown's favorite list.

You can also sign-up to receive email notifications whenever Karen Elizabeth Brown releases a new book.